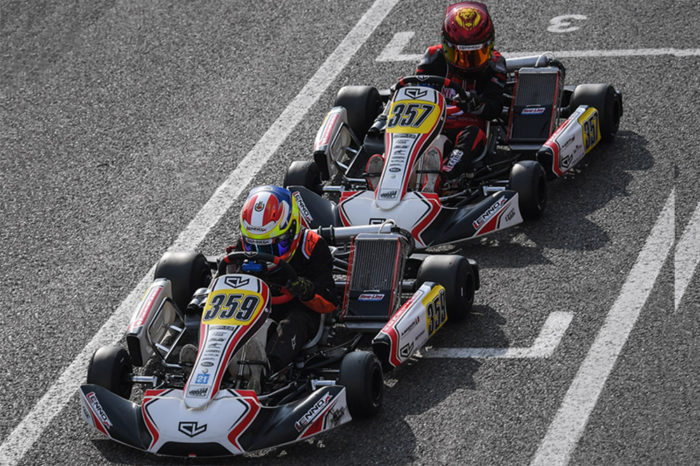 All of the drivers of team, Leclerc by Lennox Racing, have provided a great performance on a high-level test on the South Garda Karting circuit, which this weekend was theater to the 25th Winter Cup.

Despite some unforeseen events which prevented the team from returning home with a much more substantial weekend with many more victories, both the performance of the group and of the Charles Leclerc by Birel ART chassis lived up to expectations right from the first start of the free practice.

An impression reinforced by Jordon Lennox-Lamb, the Team Manager: “I am really satisfied with the progress we have made this weekend, both in terms of performance and the way we have worked together, which have paid off on the track. Too bad for the unforeseen episodes, because in KZ2 we had all the credentials to achieve a great weekend of achievements. I have seen excellent progress in the Ok and OK-Junior categories. Now, it is a matter of putting together everything that has been done and bring home the results. We are on the right track”.

Getting back to the Winter Cup weekend, qualifying is off to a good start for the KZ2 drivers with Viktor Gustavsson setting the best time in his group. Matteo Viganò, 5th, and Benjamin Törnqvist, 8th, who also performed very well and placed themselves in the top ten of their groupings. Between Friday and Saturday, Gustavsson scored two seconds, a third and a fourth spot which provided him the third place at the start of the finals, while Benjamin Törnqvist was once seventh and several times close to the top ten. An unfortunate contact, on the other hand, complicates the plans of Matteo Viganò who, until then, was the primary driver going for a victory and a second place. With the victory in the Super Heat, Matteo gains some positions on the Final’s line-up, in which he proves the great tune up he reached with the Charles Leclerc chassis by crossing the finish line in tenth position (then taken away due to a penalty), in front of Gustavsson and displaying an unapproachable pace even for the drivers in the first positions. A very nice performance in the finals by Törnqvist, who tenaciously recovered 8 spots after a Super Heat that saw him start from the back of the pack due to a technical problem.

Our OK drivers fought a great fight in the Qualifying Heats, after time tests that were very difficult due to some wet patches on the track. Despite this, Jamie Dayplaces himself in the top ten three times, also claiming a fifth spot and is able to climb up to the fourth place in the Super Heat before being pushed back by a penalty. A penalty which, unfortunately, happens again in the finals, after clawing back eight more positions when starting from the back of the field.
Unfortunately, a withdrawal in the Heat CE compromises the weekend for OliverGray who, in Lonato, demonstrates incredible progress scoring a 7th position in the races. Roman Sharapov, at his first race with the colors of the Leclerc by Lennox Racing and new to the equipment, manages to get a ticket for the Finals.

Lonato’s weekend turns out to be a very positive one for our other new debutant Grigory Kulishenko who is able to get himself twice into the top ten in the OKJand achieve the top ten in the Super Heat as well, thus achieving the entry in the finals.
Not an easy weekend for Kostin Platon, who still passes the Qualifying Heats, but for Rafael Modonese and Ivan Domingues their weekend is unfortunately tarnished with many withdrawals.

The next appointment for team Leclerc by Lennox Racing will be again at SouthGarda Karting in Lonato, where this weekend we will take part in the second round of the WSK Super Master Series.