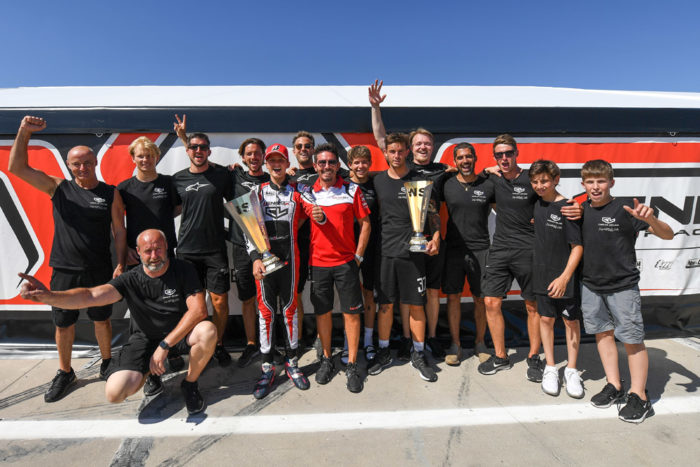 The Leclerc By Lennox Racing Team’s performances out on the track get off again to a good start and they can celebrate two podium finishes at the WSK Super Master Series thanks to Jamie Day and Matteo Viganò.

Second place in OK and third step on the podium in KZ2: both excellent results that the Leclerc by Lennox Racing Team brought home when competitive racing resumed. In the last two rounds of the WSK Super Master Series that have just been completed at the Adria Karting Raceway, our chassis, signed off by the Formula 1 driver and manufactured in collaboration with Birel ART, with the support of TM Racing, were continuously in and around the top places, proving themselves competitive yet again and ready to contest victory against any opponent.

“First of all, I’d like to thank WSK Promotion for enabling us to get back out onto the track safely – that’s the first comment by team manager Jordon Lennox-Lamb. The enforced hiatus was a serious blow to our team, which really needed to spend as much time out on the track as possible to develop its new mate- rial. Managing to get onto the podium twice this quickly and being continuously in the top places after three months away from the circuits is a major achievement and can only mean that the set of material is extremely competitive”.

Jamie Day’s second place in OK in the final of the last round crowns a weekend in which both he and Oliver Gray managed to fully exploit all the work done in the past weeks leading up to the return to the track. In addition to the podium finish, Day also managed excellent comebacks in both

Pre-finals, in which he posted the fastest lap twice and exhibited excellent race management in the Final, making the most of the characteristics of the equipment at his disposal. Gray managed his first top 10 finish since his debut in OK and what we saw on the track this week, which saw him always finish the Heats in the top 10, including two third places, gives us the belief that the Englishman is now ready to be truly competitive in the class.

Meanwhile, Matteo Viganò managed the second podium finish in a class, KZ2, in which our entire team demonstrated its ability to fulfil the extensive potential available. First and foremost, this is confirmed by the two Pole Positions achieved by Viktor Gustavsson, who, had it not been for some bad luck, could have made an exceptional weekend, featuring three wins in the Qualifying Heats and 4 fastest laps, even better.

Viganò was also denied the opportunity to compete for another podium finish in the last Final, after an excellent third place, together with the fastest lap, achieved on Saturday. However, the Italian finished both laps of the Qualifying Heats in the lead, also managing three wins and three fastest laps.

Positive signs were also forthcoming from OKJ, in which Rafael Modonese and Ivan Domingues were fast right from the start and accumulated valuable experience duelling in advanced positions. Rafael managed eighth place in the Pre-final, third in the Heats and the ninth fastest time in qualifying. Domingues, on the other hand, was penalised for an accident without serious consequences, but which compromised his weekend.

Buoyed by these results, we now head to the Circuito Internazionale in Naples, where next weekend sees the start of the WSK Euro Series. The Leclerc By Lennox Racing Team will be back out onto the track in the KZ2, OK and OKJ classes.