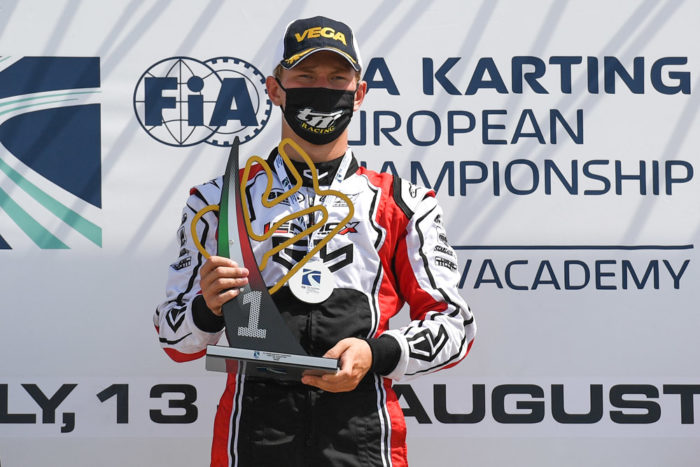 The KZ and KZ2 FIA Karting European Championship of the Leclerc By Lennox Racing team got off to a great start with its third success of the season, this time in KZ2 with Viktor Gustavsson. A victory that crowns a weekend at the top for the CL Karting by Birel ART chassis powered by TM Racing, which was confirmed to be the equipment to beat in both classes at the Adria Karting Ra- ceway.

In KZ2, Viktor Gustavsson’s weekend was nothing short of perfect. In fact, after the excellent se- cond-best time obtained in the qualifiers, the Swede took control of all four Qualifying Heats, achie- ving as many as 4 fastest laps. Then, in the final, in which he was always in command and triumphed well ahead of the others, it was once again Gustavsson who achieved the best lap of the race.
Now, thanks to this splendid victory, the overall championship standings are on the Swede’s side, firmly in the lead with all 35 points up for grabs this weekend.
But in addition to success in Adria, the Leclerc By Lennox Racing team also fielded Benjamin Törn- qvist for the first time after the resumption of the season, and welcomed the new entry Luca Bosco, who began his European Championship by coming very close to qualifying for the decisive race.

In KZ, on the other hand, Matteo Viganò managed to achieve a great performance even if a certain bas taste remains in the mouth for how the final ended. In reality, Viganò’s qualification was not per- fect, but the Italian pushed through the group in the Qualifying Heats where, thanks to a fourth, fifth and third place, he managed to move up to the second row for the start of the final, where he achie- ved an excellent starting point that he used to move into second position after only two bends. In the second part of the race, Viganò decisively tried to attack the first position, but was forced to with- draw on the penultimate lap, just when he had managed to put pressure on the leader of the race.

However, there is not much time for the Leclerc By Lennox Racing team to celebrate Viktor Gusta- vsson’s victory. In fact, this weekend the drivers of the OK and OKJ classes will be back on track for the second round of the FIA Karting European Championship to be held at the Naples Internatio- nal Circuit.