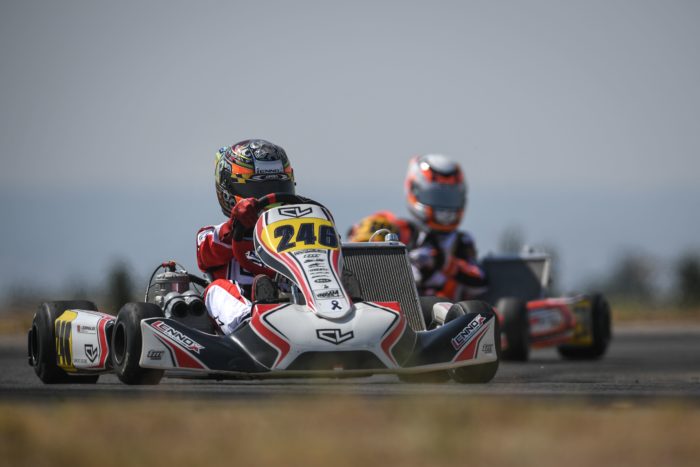 The FIA Karting European Championship OK and OKJ has finally started for the Leclerc By Lennox Racing team, which returned from the Circuito Internacional de Zuera with important confirmations regarding the soundness of the CL Karting by Birel ART – TM Racing package, in terms of the preparation work completed and this event.

Work which Laurens Van Hoepen and William Macintyre were able to reap the benefits of in the first race with our team, already able to fight for the top positions. Despite the many positive notes, not everything went according to plan, as also confirmed by the team manager Jordon Lennox-Lamb:

“First of all, I would like to congratulate the team and drivers because they have done a really great job. There is a little bitterness on our part because given our potential we expected to achieve more success this weekend. Accidents and some penalties here and there prevented us from being in a position to fight for the results we were aiming for. However, I am very happy with the speeds we achieved. Now we just have to stay focused and work for the Adria and Sarno races“.

In OK, a class that was really satisfying for the team and where very little was missing to fight for the podium, Laurens Van Hoepen, with his fifth final place, achieved the best result of the Leclerc by Lennox Racing team. The Dutchman had an impeccable first round in which he maximised the full potential of our equipment in his first official outing with the team. In addition to reaching the final, Van Hoepen achieved excellent results in the qualifiers, which saw him take seventh place overall, while in the Heats he crossed the finish line in third place three times and once second. Oliver Gray finished sixth in the final, after being held back by a penalty in the heats that ruined a weekend that up to that time had been without errors and in which he achieved three second places. Unfortunately, Jamie Day had to deal with a qualifying round that was heavily influenced by the wind, a result that influenced all of the subsequent heats. Day still managed to reach the final, where even then, however, he suffered a penalty that thwarted his comeback.

The potential of our drivers proved to be high from the start in OKJ as well. This was demonstrated by the results achieved by Rafael Modonese, with a third and two fourth places in the Heats, and those of William MacIntyre who instead achieved a second and fourth place as the best result after having gained the fifth fastest time in the timed practice. Ivan Domingues also entered the top ten three times, but all three of our drivers underwent withdrawals and penalties that affected their starting position for the final. Unfortunately, Rafael Modonese was involved in an accident in the final after the first bend while Ivan Domingue’s race ended only two laps later for the same reason. Finally, Macintyre’s progression was also compromised by the tussle unleashed in the middle of the group.

After the Zuera event, the OK and OKJ drivers of the Leclerc By Lennox Racingteam will be back on track in three weeks’ time. From 13 to 16 August, we will instead be at the Adria Karting Raceway with our KZ and KZ2 drivers for the first of the two rounds of the FIA ​​Karting European Championship dedicated to gear karts.