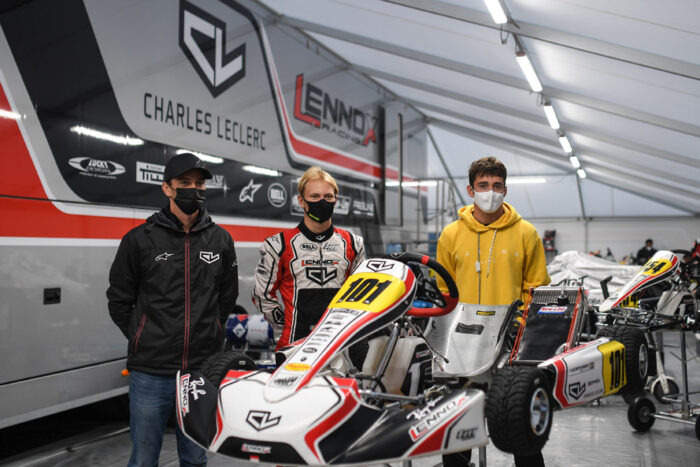 Despite the excellent initial expectations, the outcome of the KZ World Championship and the KZ2 International Super Cup was not the one hoped for by the Leclerc by Lennox Racing team, whose drivers still showed a winning pace behind the wheel of the CL Karting by Birel ART chassis with TM Racing engines.

At South Garda Karting, venue of the world championship, race episodes and penalties prevented the team from realising the excellent pace shown right from the start, even in uncertain conditions, confirmed by the comebacks made in the finals of both classes. The weekend began under excellent auspices in KZ2, where the Leclerc by Lennox Racing team started in the first two positions at the end of qualifiers held in extremely variable conditions. In fact, Viktor Gustavsson was in pole position, followed by compatriot Benjamin Törnqvist, the latter also performing well in the heats, finishing in sixth place in the standings. For Gustavsson, on the other hand, who achieved a first and three fourth places in the heats, there was unfortunately also a disqualification that robbed him of the victory that would have allowed him to be a contender for the title. In the final, Törnqvist saw his chances vanish almost immediately due to a contact that took place shortly after the start, while Gustavsson’s weekend ended with a comeback of 10 positions and a top-10 finish. A more difficult weekend for Laurens Van Hoepen in his first race in KZ2, and for Luca Bosco, who in the weather conditions encountered in Lonato, were hampered by their lack of experience in this class.

Also in KZ, where we took to the track with the duo formed by Matteo Viganòand Ferrari Development Driver Antonio Fuoco, the results did not fully reflect the team’s potential. For Viganò the way forward became complicated as early as the first heat, when he was forced to withdraw with 8 laps to go, thereby compromising his starting position for the decisive race. For his part, Fuoco used the qualifying heats to become familiar with the equipment and significantly improved, gaining 5 positions in the standings. In the final, they both achieved excellent times and recovered 5 positions each, with Viganò finally managing to finish inside the top ten group.

With the KZ and KZ2 World Championships also coming to an end, the Leclerc by Lennox Racing team is now starting preparations for the OK and OKJ FIA Karting World Championship scheduled to start at Portimao in just over a month. However, before this, the drivers will be back on a track for the last round of the Champions of the Future, also to be held at the Portuguese circuit from 29 October to 1 November.