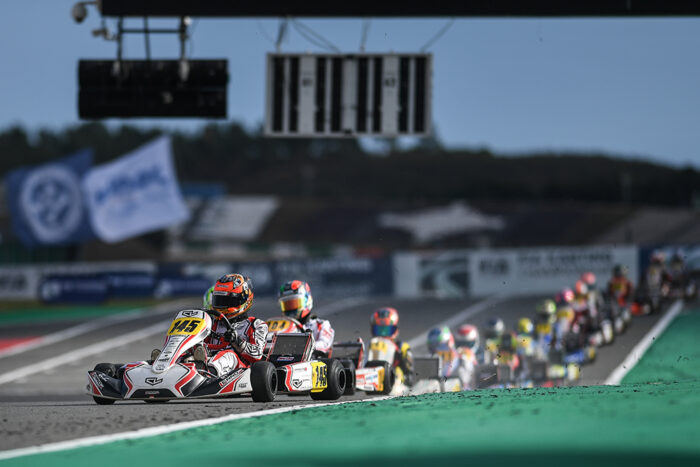 The FIA Karting World Championship weekend was one of those events marked in red on the Leclerc By Lennox Racing team’s calendar.

However, the heavy rain, combined with highly variable weather conditions and the track at the Kartodromo Internacional do Algarve, shuffled the deck several times, making it difficult for drivers from as early on as the timed practice sessions. Finding themselves stuck in the middle of the group, knocks and penalties ultimately prevented them and the team from exploiting their full potential and frustrated much of the development work done with the TM Racing-powered CL Karting by Birel ART chassis.

All of the above, despite the good results obtained in both classes, starting with OKJ, in which Martinius Stenshorne tenaciously made it to the decisive race. Starting from the back of the field, the Norwegian scores three top-ten finishes, including a fifth place, as well as posting two fastest laps. In the Final, which he started in 20th position, Stenshorne climbed to within touching distance of the top 10, eventually managing to improve his starting position despite a 5-second penalty due to the front nose ending up out of position during the jostling. Ivan Domingues, who would undoubtedly have made it to the Final had it not been for his retirements and a penalty awarded in the Qualifying Heats, also managed to be encouragingly competitive.

Laurens Van Hoepen took part in the OK class Final, having finished in the top ten in the wet qualifiers on Friday. However, after good performances in the heats, where he managed two top-ten results, Van Hoepen didn’t really have a chance to play his hand in the decisive race, which saw him retire on the fourth lap. No luck for Jamie Day, who was the victim of a penalty in the heats, or for Oliver Gray, who nevertheless managed a sixth and a tenth place, but didn’t cross the finish line in two of the heats: their weekends ended prematurely.

The goal for the Leclerc by Lennox Racing team now is to capitalise on what they’ve learned for the upcoming events. Starting with the WSK Open Cup, which will kick off in two weeks’ time at the Adria Karting Raceway, where both rounds will take place and where KZ2 drivers will also take to the track.