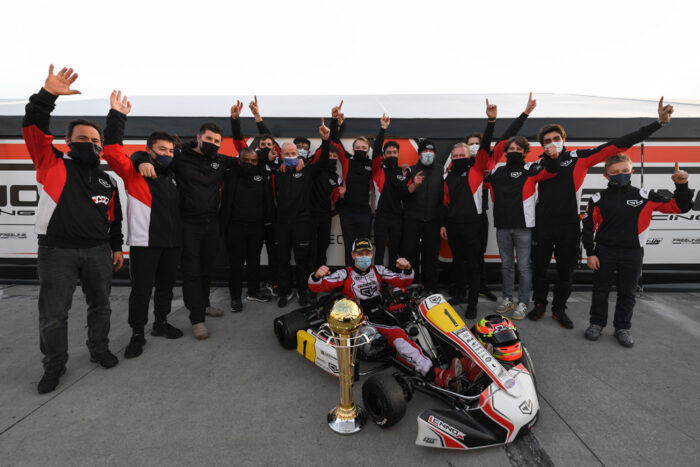 The Leclerc by Lennox Racing team won at its seasonal debut on the Adria Karting Raceway circuit with Viktor Gustavsson, who dominated the KZ2 final.

2021 could not have started in a better way for the Leclerc by Lennox Racingteam. The CL chassis manufactured by Birel ART and powered by TM Racing immediately proved to be fast in all the classes, from MINI to KZ2.

In the premier category, Viktor Gustavsson dominated the final, gaining the lead in the race at the start and maintaining it up to the chequered flag. After starting the weekend with the second group time and the fourth overall in the qualifiers, Gustavsson finished third in his first heat and won the next two. These results meant he started second in the pre-final, a race that the Swede strongly won with the fastest lap. In the final, Gustavsson had a decisive start from the first box on the grid and completed 20 laps without making any mistakes.

Good performances in KZ2 also for Axel Bengtsson and Moritz Ebner. Among the top 15 in their respective groups in the qualifiers and in the heats, the two drivers of the Leclerc by Lennox Racing team closed a weekend in which they continued to improve their positions in the top 20. Bad luck, however, for Laurens Van Hoepen, who was forced to retire in the final after achieving good speeds. With the eighth group time and 15th overall in the qualifiers, Van Hoepen was always competitive in both the heats and pre-final, constantly competing in the top 10 and setting excellent lap times.

An encouraging debut in OK for Martinius Stenshorne. Fast since the qualifiers and in the top 10 in the heats, Stenshorne crossed the finish line of the final in the top 15. The debut of Ivan Domingues and Oscar Aponte was useful for getting familiarised with the premier class of single-speed karting. The two drivers of the Leclerc by Lennox Racing team gained important experience for their development and are determined to demonstrate their improvements starting from the next race.

First apprenticeship competition for Marcus Saeter in OKJ. Saeter used the weekend to adapt to the new CL material and made good progress day after day.

In MINI, a top weekend for Matic Presa: it all began with the third fastest time in the group and 11th overall out of 116 participants in the qualifiers. Constantly in the top five in the heats, on Sunday morning Presa won his last qualifying heat, before competing in the leading group also in the pre-final. Unfortunately, an unlucky final saw his retirement in the early stages of the race, but the young standard bearer of the Leclerc by Lennox Racing team will be at the next challenge even stronger than before.

The Leclerc by Lennox Racing team will see you at the next weekend, 26-28 February, for Round 1 of the WSK Super Master Series, which will also be held at the Adria Karting Raceway circuit.