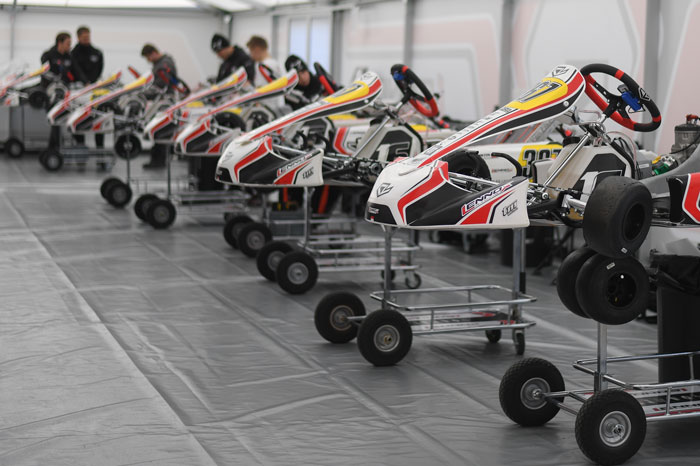 Jordon Lennox-Lamb’s team lines up at the start of the new season with 13 drivers from nine different countries to compete for international honours in all classes, ranging from Mini to KZ.

The Charles Leclerc chassis produced by Birel ART take to the track for their second season under the management of the Lennox Racing Team, with the support of TM Racing for their engines. The mission of taking the technical package to the top of the international standings lies with a team that is an excellent mix of young talent and established stars.

Representing the CL team’s colours in KZ is a duo of the highest calibre formed by Italian Matteo Viganò and Swede Viktor Gustavsson. In his second season with the Leclerc by Lennox Racing team, Viganò only has one goal: to reap the rewards of the hard work done in 2020 in order to record some podium finishes and wins. After a surprising year in KZ2, culminating the first European title for the Charles Leclerc brand, Gustavsson will make his debut in the top class in karting to compete with the best drivers in the world and continue to fly the team flag high.

In KZ2, Jordon Lennox-Lamb’s team outs its faith in Dutchman Laurens Van Hoepen, Swede Axel Bengtsson, Italian Moritz Ebner and Russian Roman Sharapov. Having performed well in the Charles Leclerc team in OK at the end of 2020, Van Hoepen will have his first full season in the shifter class, as will his teammate Sharapov. Ebner, on the other hand, will make his debut on the international scene, having achieved positive results at national level which last year in CL. Bengtsson, an experienced driver, makes a return to competitive racing after a year off.

Moving on to the non-shifter classes, a rookie quartet composed of Martinius Stenshorne (Norway), Ivan Domingues (Portugal), Oscar Aponte (Switzerland) and Grigory Kulishenko (Russia) is set to develop the CL project in the OK class. Stenshorne joined the Leclerc by Lennox Racing team at the end of 2020 and immediately showed great potential in his few races in the OKJ class. Domingues and Kulishenko are also well-known talents under the team tent, having raced for Jordon Lennox-Lamb’s team in the lower class, while Aponte will be a brand new entry, in his first year on the international scene.

In OKJ, the Leclerc by Lennox Racing team fields a pair of promising youngsters formed by Norwegian Marcus Saeter and American Caleb Gafrarar. Saeter is a new entry, while Gafrarar joined the CL team last year to compete in the Mini class.

The Mini class boasts the youngest driver in the Leclerc by Lennox Racing team: Slovenian Matic Presa. In his second year in the class and his first in the CL livery, Presa will be fully supported directly by Jordon Lennox-Lamb’s team, under the supervision of multiple world champion Alessandro Manetti, head of the Mini project at Birel ART.

The CL group has already taken to the track for its first tests of the season under the guidance of its team manager, Jordon Lennox-Lamb, who declared: “For a first year, 2020 went very well: be competitive immediately at the debut, winning races and even a European title, was undoubtedly very positive. However, motorsport makes us ambitious and competitive, so the goal is to do even better in 2021. I’m also curious to see Gustavsson in KZ because he’s very young, only 17, but he’s very fast. I also hope Viganò has better luck, because he would have won quite a few races without all that bad luck last year, in my opinion”.

The Leclerc by Lennox Racing team will be in competitive action on the weekend of 19-21 February for the first race of the year, the WSK Champions Cup, which will be held at the Adria Karting Raceway circuit.