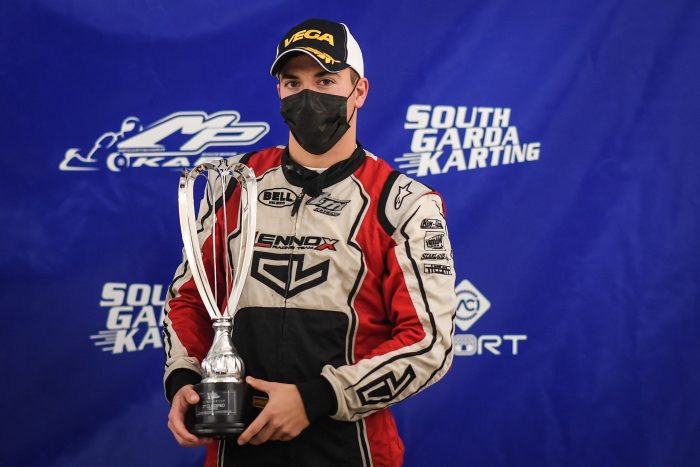 The Leclerc by Lennox Racing team put the icing on the cake in Lonato to end the European season. The CL chassis produced by Birel ART and powered by TM Racing proved to be extremely competitive in KZ2 as well as in OKJ, both in dry and wet conditions.

Pedro Hiltbrand was an absolute protagonist in the shifter class. After posting the second fastest group time in qualifying, just 75 thousandths of a second from pole position, the Spaniard won all of his first three heats in dry conditions and also dominated his fourth heat under the rain. The standard-bearer of the Leclerc by Lennox Racing team reaffirmed his excellent form in wet conditions on Sunday, crossing the line of his Super Heat in second place and managing to claim the first spot on the starting grid for the Final. In the last competition of the weekend, the newly crowned European KZ vice-champion led the first half of the race, before taking the chequered flag in third place and achieving yet another podium finish this season.

Matteo Viganò showed his speed too in KZ2, starting with the fifth fastest group time in qualifying. The Italian driver continued with a third place and three second-place finishes in the heats, even boasting the fastest lap on two occasions. Viganò also proved to be incisive under the rain on Sunday, finishing his Super Heat in second place after battling it out for victory. Matteo reaffirmed his presence at the top of the standings in the Final and took the chequered flag in third place, although a five-second penalty due to the incorrectly positioned front fairing relegated him to fifth place. It was a positive weekend for David Liwinskitoo, as he went fourth fastest in his group in qualifying and was always among the top six in the heats, clinching a third place as his best result. The recent winner of the ROK Cup Superfinal was less fortunate on Sunday and in his Super Heat he missed out on a top-ten result on the last lap. Another difficult last lap deprived him of a top-15 finish in the Final and the Polish standard-bearer was even awarded a five-second penalty due to the incorrectly positioned front fairing.

Konstantin Krapin‘s performances in OKJ were equally solid. The young Russian posted the ninth fastest group time in qualifying, just 53 thousandths of a second from pole position, and skilfully battled in the leading group in his first three heats in dry conditions, finishing them all inside the top seven, but was unfortunately forced to retire in his fourth heat under the rain. On Sunday, bad luck stopped him from capitalising on the good potential he had shown in wet conditions, but Krapin still managed to highlight his progress within the team.

The curtain fell on the European season of the Leclerc by Lennox Racing team, who will now prepare for the traditional Supernationals race in Las Vegas.