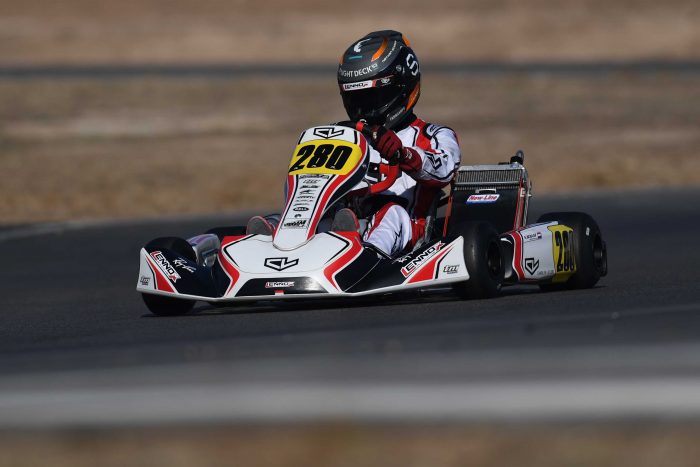 Leclerc by Lennox Racing’s weekend in Campillos was encouraging,  with  a race that represented  a real testing ground for the FIA ​​world championship, scheduled for the following week at the same circuit. The CL chassis  produced by Birel ART and powered by TM Racing once again proved their competitiveness in both classes competing, OK and OKJ.

In the premier class of single-speed karting, Martinius Stenshorne was once again a protagonist, posting the third best group time in qualifying. His positive performance continued in the heats, in which he never finished outside the top 5, except for once due to a penalty awarded because the front fairing  was in an incorrect position. The standard bearer of the Leclerc by Lennox Racing team then came fifth in the Pre-final and crossed the line of a hard-fought Final in eighth place. Thanks to this result, Stenshorne achieved a top-ten finish  in the championship.

Pedro Hiltbrand had a weekend to forget in the OK class. Unfortunate  events didn’t enable him to show his real speed. Two retirements in the heats forced him to start from the back of the grid in the Second Chance Heat. Despite this handicap, the Spaniard managed sixth place thanks to an excellent 18-place comeback, a result that allowed him to qualify for the Pre-final. However, in the Pre-final and Final, other two retirements put an end to an unlucky weekend. Bad luck also affected Nathan Schaap, forced to retire in the Second Chance Heat after having demonstrated he was quick . Nevertheless, his debut with the CL package was promising and the Dutch driver completed outstanding comebacks  in all his heats.

Konstantin Krapin continued to gain valuable experience in OKJ. The young Russian claimed a top-ten finish in one heat thanks to an 11-place comeback and is confident in view of the next races.

The Leclerc by Lennox Racing team is already looking forward to the next weekend, 29-31 October, to race  the FIA ​​Karting World Championship OK-OKJ, which will also be held at the Campillos circuit.