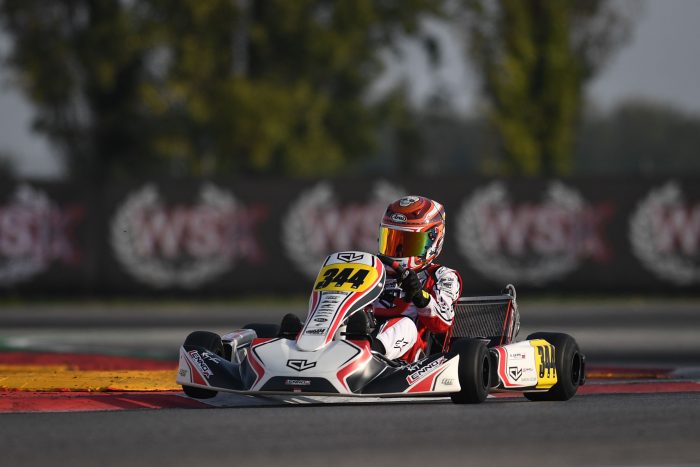 The team showed its speed in the second and final round of the WSK Open Cup and continued with the development of the technical package in view of the last seasonal events.

The performances of the Leclerc by Lennox Racing team at the Adria Karting Raceway circuit were solid. The CL chassis produced by Birel ART and powered by TM Racing once again demonstrated good potential in KZ2 and in the single-speed classes, OK and OKJ.

In the gearbox class Laurens Van Hoepen confirmed himself as a protagonist and began the weekend by achieving the fifth fastest time in qualifying , just 43 thousandths from pole position. The young Dutchman was consistent in the heats and always remained inside the top ten, to then finish the pre-final in sixth place. The standard bearer of the Leclerc by Lennox Racing team started the final from seventh place, but after two frantic first laps he returned to sixth place and, thanks to a remarkable pace, closed the gap with the drivers in front of him. Van Hoepen crossed the finish line just half a second from the podium, setting the third fastest lap of the race.

Positive results in KZ2 also for Axel Bengtsson, who showed his progress. The Swedish driver did not shine in qualifying , but gained positions in all his three heats and finished twice inside the top 15. The driver of the Leclerc by Lennox Racing team reaffirmed his presence in the top 15 both in the pre-final and in the final thanks to some convincing performances. The improvements made by Mattia Simonini, in his second appearance of the season, were equally promising. The young Italian finished his first heat inside the top 15, to then come close to this result again in the final.

In his second race with the CL colours, Konstantin Krapin showed that he already has an excellent feeling with the technical package in OKJ. After a difficult qualifying session, the Russian standard bearer showed his speed in the heats, in which he always started from the sixth row. The driver of the Leclerc by Lennox Racing team achieved some surprising comebacks, even winning a third place, a fourth and two other top-ten finishes. A final characterized by hard racing and by a penalty did not allow Krapin to realise his potential, but he is confident for the next competitions. Riccardo Ferrari‘s debut with the CL technical package was encouraging too. The Italian standard bearer improved during the heats and in the pre-final he gained eight positions compared to the start, gaining experience.

An unlucky weekend in OK for Pedro Hiltbrand, who was forced to leave the race prematurely. The fresh European KZ vice-champion had pain in his ribs and together with the team decided to rest in view of the upcoming OK-OKJ FIA Karting World Championship, to take place in Campillos at the end of October.

The Leclerc by Lennox Racing team will see you at the next race, Round 3 of Champions of the Future, to be held at the Campillos circuit on the weekend of 22-24 October.