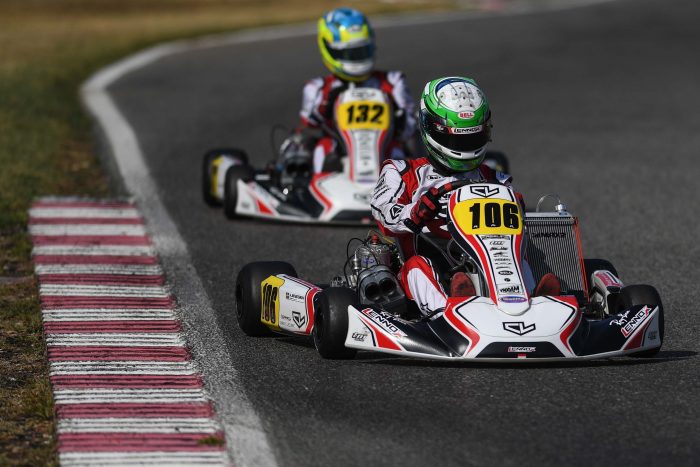 The drivers of the team proved to be competitive on the South Garda Karting circuit in Lonato and carried out important work  in view of the next events.

After successfully finishing the first two WSK series of the season, the Leclerc by Lennox Racing team also convincingly started the third one. The CL chassis produced by Birel ART and powered by TM Racing confirmed themselves fast in KZ2 and in the single-speed classes, OK and OKJ, both in dry and wet track conditions.

In the KZ2 class Laurens Van Hoepen reaffirmed his presence at the top of the rankings, placing himself inside the top 15 in qualifying and inside the top ten at the end of the heats. A pre-final held under the rain saw him being even more incisive, so much so that the young Dutchman finished third thanks to a seven-place comeback , and then crossed the finish line of the final, back on a dry track, in eighth place. Also Viktor Gustavsson was a protagonist in KZ2, achieving the eighth best time in qualifying . During the heats, some unfortunate events and two five-second penalties deprived him of his good results, but the standard bearer of the Leclerc by Lennox Racing team gained 17 positions in the prefinal to return to the top five. The winner of the WSK Champions Cup completed the weekend with ninth place in a hard-fought final.

The progression of Axel Bengtsson was remarkable too, as in the prefinal he showed his excellent feeling in wet track conditions by recovering 15 positions and finishing ninth, despite being then demoted to tenth place by a penalty. The Swedish driver also performed very well on a dry track, finishing the final inside the top 15. A first seasonal weekend of apprenticeship, instead, for Mattia Simonini.

Pedro Hiltbrand‘s performance in OK was solid. After achieving the ninth best group time in qualifying , the recent European runner-up in KZ came fourth in one of the heats, but retired in the other two while fighting inside the top ten. The standard bearer of the Leclerc by Lennox Racing team then gained nine positions in the prefinal to finish seventh and another five in the final to cross the finish line in eighth place. Also Martinius Stenshorne showed his speed, starting the weekend with the fifth best group time in qualifying . The Norwegian driver came third in one of the heats, but, like his teammate, was forced to retire in the other two while finding himself inside the top ten. A bitter pre-final, which saw him leave the scene in the warm-up lap, did not allow the young rookie to qualify for the final.

In OKJ it was a promising debut with the CL colours for Konstantin Krapin. In his first appearance with the Leclerc by Lennox Racing team, the Russian standard bearer claimed a top-15 result in his group in qualifying and achieved two top-ten finishes during the heats, despite being demoted on one of the two occasions by a penalty. Two retirements and another penalty in the other three heats forced him to start from the 14th row in the prefinal, but thanks to a surprising performance on a wet track the young driver recovered 15 positions and took the chequered flag just outside the top ten. Krapin was involved in a contact on the first lap of the final, which saw him restarting from the back of the grid, and climbed up the order to reach the top 20, despite being then demoted to 23rd place due to the incorrect position of his front fairing . Also Louis Leveau gained valuable experience throughout his first competition with the team.

The Leclerc by Lennox Racing team will see you at the next race, Round 2 of the WSK Open Cup, which will be held at the Adria circuit on the weekend of 1-3 October.