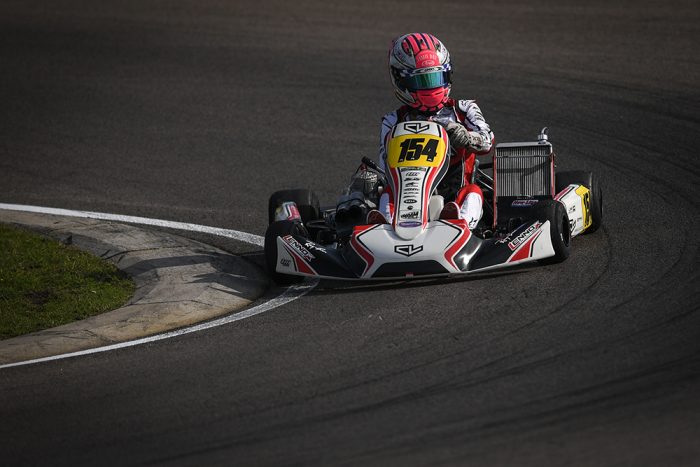 The team proved to be extremely competitive on the Kristianstad circuit at the FIA Karting World Championship KZ and the FIA Karting International Super Cup KZ2, but certain episodes affected the final results.

After successfully completing the European championship of shifter classes, the Leclerc by Lennox Racing team presented itself at the most important event of the season with all the necessary requirements to be an absolute protagonist. In fact, the CL chassis produced by Birel ART and powered by TM Racing confirmed their value in both classes competing, KZ and KZ2.

In the premier class, Matteo Viganò started the weekend with the fourth best time in qualifying, just 30 thousandths from pole position, and then dominated all three heats. The standard bearer of the Leclerc by Lennox Racing team thus gained the start from pole position for the final, but unfortunately in the decisive race he was forced to retire during the first lap and was therefore deprived of the possibility of contending for the world title, which seemed well within his reach. His teammate Pedro Hiltbrand was equally competitive. The recent European vice-champion set the fifth fastest time in qualifying, just 33 thousandths from pole position, and won the first heat with an impressive pace. However, the Spanish driver was excluded from the event for having tried, without actually doing so, to put the front spoiler back into the correct position during the cool-down lap. Hiltbrand arrived in parc ferme with the nose cone still incorrectly positioned, immediately reporting it to the steward and receiving the traditional five-second penalty. However, the race stewards harshly applied the rules, and excluded him from the competition.

Viktor Gustavsson managed to realise his good potential, starting with the seventh fastest time in qualifying and always managing to stay inside the top ten in the heats. The Leclerc by Lennox Racing team driver started sixth in the final and reached third place as early as the second lap. The young Swede also came close to the driver in front of him, and then crossed the finish line of his third race in KZ in fourth place, just one step away from the podium.

After coming third in the European Championship, Laurens Van Hoepenreaffirmed his competitiveness in KZ2. The driver of the Leclerc by Lennox Racing team set the fourth best group time in qualifying and closed all his five heats inside the top ten, also achieving two top-five finishes and a fastest lap. The Dutch driver started from the tenth row of the grid in the final and finished close to the top ten thanks to an eight-place comeback, but was then relegated to 17th place due to a penalty. A positive weekend also for Charlie Andersen, incisive on his home track. The Swedish standard bearer unfortunately saw his access to the final fade due to a single penalty.

Axel Bengtsson proved to be very fast, ninth in his group in qualifying and eighth in his first heat, but penalties and a retirement in his last heat prevented him from qualifying for the final. A similar situation for Jamie Day who was demoted on two occasions by two five-second penalties during the heats, penalties that then contributed to failing to reach the final. Roman Sharapov continued on his growth path and delivered promising performances during the heats. A first seasonal weekend that served as an apprenticeship, instead, for Greg Caton.

The Leclerc by Lennox Racing team will see you at the next race, Round 1 of theWSK Open Cup, which will be held at the South Garda Karting circuit in Lonato on the weekend of 17-19 September.