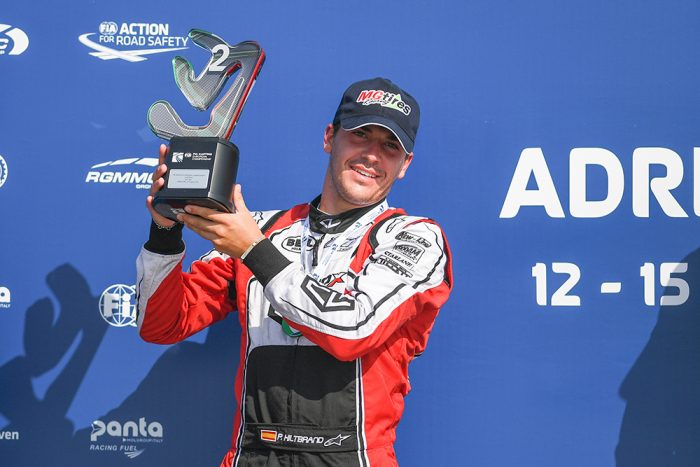 The Leclerc by Lennox Racing team proved to be extremely competitive on the Adria Karting Raceway circuit, in a hot weekend that put a strain on both the drivers and vehicles. The CL chassis produced by Birel ART and powered by TM  Racing  were incisive in both classes competing, KZ2 and KZ.

In the premier class, after having achieved the seventh best time in qualifying and having finished the first two heats  inside the top ten, Pedro Hiltbrand crossed the finish line of the last heat in second position. Starting fourth in the final, he moved to second place as early as the second lap and thanks to an excellent pace, especially in the initial phase of the race, he closed the gap with the leader. Hiltbrand took the chequered flag in second place and thus became European vice-champion in his first year with the CL colours.

A very positive weekend in KZ also for Viktor Gustavsson, who started with the third best time in qualifying and was always inside the top six in the heats. Starting in third place in the final, the Swedish driver had a solid race, which saw him finishing in third position and thus achieving his first podium in the premier category at his second experience. Matteo Viganò was just as fast, but luck wasn’t on his side. After having achieved the second-best time in qualifying, the Italian dominated all three heats and claimed pole position for the final, a race in which he had, even without any chassis or engine problems, a very anomalous drop in performance that in fact relegated him to last position after having been consistently at the top during the whole weekend.

Laurens Van Hoepen confirmed his position at the top of the KZ2 rankings. The Dutch driver achieved the fourth best group time in qualifying and proved to be mature in the heats, finishing all his five heats inside the top six, results that earned him ninth place for the start of the final. Thanks to an intelligent race management, Van Hoepen crossed the finish line in seventh place and, after having climbed on the lowest step of the podium in the first round in Wackersdorf, took home the bronze medal in the championship in his debut season in the shifter class.

Jamie Day started the weekend with the second-best group time in qualifying, just eight thousandths from pole position. The UAE driver won his first heat, to then come third and fourth  respectively in the other two heats. A penalty and an unlucky start forced him, however, to start from the eighth row in a hard-fought final that did not allow him to express his full potential. Axel Bengtsson’s performance was encouraging, as he was consistently inside the top 15 both in his group in qualifying and in the heats, but unfortunately saw the possibility of fighting for access to the final fade away due to some penalties. Charlie Andersen, who completed good comebacks in every heat, gained further experience in his second appearance of the season.

The Leclerc by Lennox Racing team will see you at the next race, the KZ FIA Karting World Championship  and  KZ2 FIA Karting International Super Cup, which will be held at the Kristianstad circuit on the weekend of  3-5 September.