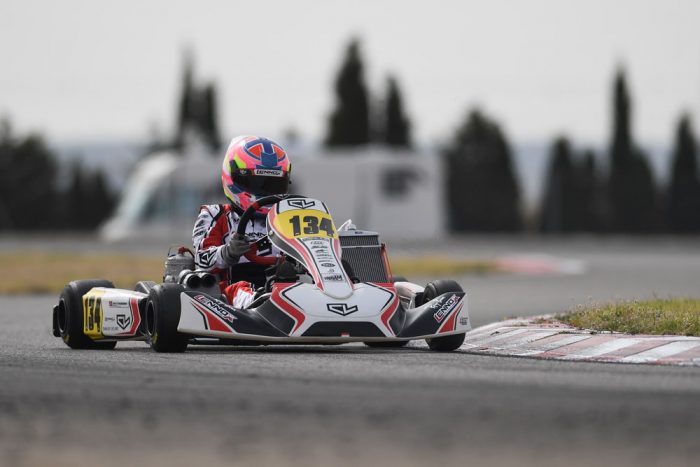 The team demonstrated its speed during the fourth and final round of the FIA ​​Karting European Championship OK-OKJ, even though the final results don’t give the drivers the recognition they deserved.

Building on the experience gained during last weekend’s race in the second round of the Champions of the Future series, the Leclerc by Lennox Racing team once again displayed impressive potential at the Zuera circuit. The CL chassis produced by Birel ART and powered by TM Racing proved their worth in both the OK and OKJ classes.

In the premier class of single-speed karting, Martinius Stenshorne once again shone and started the weekend convincingly by posting the third fastest group time in qualifying. After being forced to retire in the first heat and finishing eighth in the second, the Norwegian driver returned to the top of the standings in the other two heats, in which he crossed the finish line in second and third place respectively. The standard-bearer of the Leclerc by Lennox Racing team started the Final on the eighth row of the grid, but a contact on the first lap caused him to lose ground. Stenshorne wasn’t discouraged and his excellent race pace saw him climb the field and cross the finish line in seventh place. The rookie was then pushed back to 14th place due to a five-second penalty for the incorrectly installed front fairing, but his performances were nevertheless positive and he ended the championship just outside the top ten in his debut season in the class.

There were also encouraging signs from Santiago Vallve Martin in OK in his first appearance of the season. After a complicated qualifying session, the Spaniard finished his first three heats inside the top 15, managing to climb at least eight places from his starting position on the grid in each race. A five second penalty due to an incorrectly installed front fairing in his last heat put an end to his chances of making it to the Final. It was an unlucky weekend, instead, for Nikolay Violentii. After performing very well in last week’s race, which served as a test for this main event, the Russian standard-bearer finished qualifying inside the group top ten, but his heats were mainly characterised by contacts that prevented him from continuing to improve.

Marcus Saeter confirmed his progress in OKJ. The young Norwegian demonstrated his speed also by posting a fastest lap in the heats. Unfortunately, a five-second penalty due to an incorrectly installed front fairing caused him to slip back in the intermediate standings and he lost access to the final for just one point. Caleb Gafrarar had a very similar race to that of his teammate and, due to two penalties in his last two heats, the American missed out on the Final too. Although their results didn’t reflect their ability on track, both Saeter and Gafrarar nevertheless demonstrated promising improvements in view of future competitions.

The Leclerc by Lennox Racing team now looks forward to the next race, Round 2of the FIA ​​Karting European Championship KZ-KZ2, which will be held at the Adria circuit on the weekend of 13-15 August.