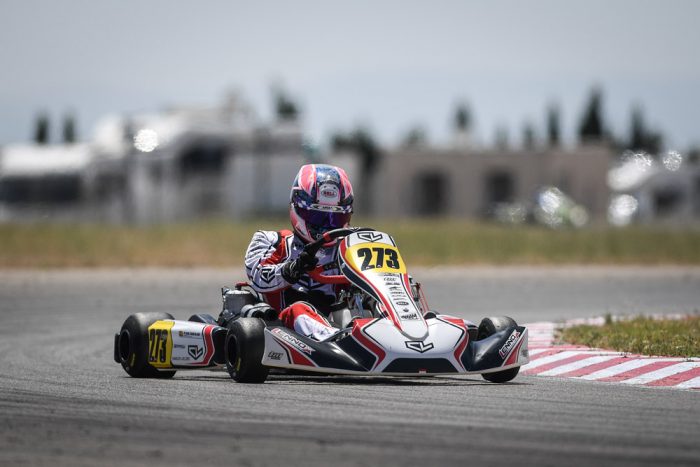 The team showed good potential during the second round of the Champions of the Future series and put in a lot of work ahead of the European Championship.

It was a positive weekend at Zuera for the Leclerc by Lennox Racing team and the race acted as a testing ground for the fourth round of the FIA ​​Karting European Championship, scheduled in a week’s time on the same circuit. The CL chassis produced by Birel ART and powered by TM Racing proved to be competitive in both classes competing, OK and OKJ.

There was a crescendo in the performances of Pedro Hiltbrand in the premier class of single-speed karting during the weekend. After having set the ninth best group time in qualifying, the Spanish driver climbed the field in every heat, finishing eighth, sixth and fourth. Therefore, the standard-bearer of the Leclerc by Lennox Racing team started on the sixth row of the grid in the Pre-final and managed to climb six places, finishing fifth. In the Final, Hiltbrand got off to a great start and immediately moved into third place, whereupon he fought tooth and nail in a hard-fought race and crossed the finish line seventh.

Martinius Stenshorne also put in some convincing performances in OK. The Norwegian rookie posted the ninth best group time in qualifying and always finished all the heats inside the top ten, in which his best result was a third place and in which he managed to prove his speed. The Leclerc by Lennox Racing team standard-bearer finished an intense Pre-final inside the top 15, but a five-second penalty for the incorrectly installed front fairing set him back a few places. Stenshorne reaffirmed his competitiveness in the Final and impressively climbed back up the field after a difficult start, crossing the finish line inside the top 15. Nikolay Violentii confirmed his improvements, skillfully defending himself in the heats and finishing the Second Chance Heat in third place thanks to an excellent race management. The Russian driver thereby made it through to the Pre-final, a race in which he climbed 12 places from his starting position on the grid and almost got into the top 20. Unfortunately, the standard-bearer of the Leclerc by Lennox Racing team was forced to retire in the early stages of the Final, but his progress bodes well for coming events.

Marcus Saeter‘s weekend in OKJ began with an unfortunate problem in qualifying, which stopped him from posting an official lap time. Consequently, the young Norwegian was forced to start at the back of the grid in every heat and managed to put together some excellent performances, especially in his first race of the weekend, in which he climbed 14 places from his starting position and finished inside the top 15. The Leclerc by Lennox Racing team standard-bearer also proved his speed, but unfortunately missed out on the Second Chance Heat by a single place due to a few penalties. A troubled path for Caleb Gafrarar too, as he was forced to retire in two heats. However, the American driver was able to get to know the circuit of Zuera and gave encouraging signs in view of the next competition.

The Leclerc by Lennox Racing team is already back out on track next weekend, June 23-25, for Round 4 of the FIA ​​Karting European Championship OK-OKJ, which will also be held at the Zuera circuit.