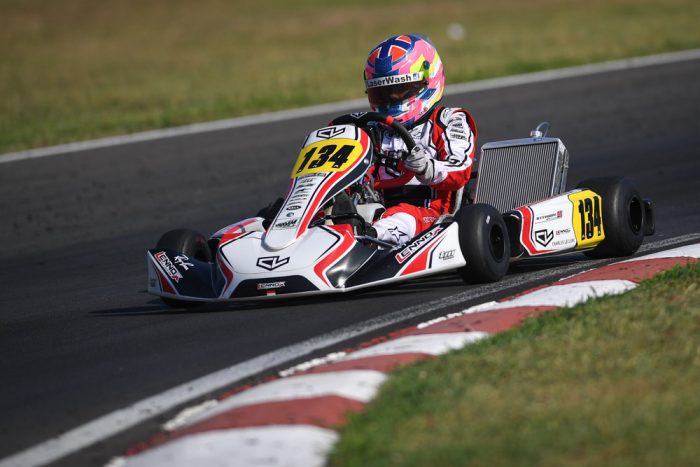 The team’s drivers proved their competitiveness once again in the third round of the FIA ​​Karting European Championship OK-OKJ, although bad luck compromised the final results

A race characterised by various problems prevented the Leclerc by Lennox Racing team from achieving the desired results. However, the CL chassis produced by Birel ART and powered by TM Racing demonstrated excellent potential in both classes competing, OK and OKJ, at the Circuito Internazionale Napoli.

Martinius Stenshorne is a consistent protagonist in the premier class of single-speed karting and didn’t miss his appointment with the top positions. The Norwegian driver posted the third fastest group time in qualifying, just 76 thousandths of a second from pole. The standard-bearer of the Leclerc by Lennox Racing team also put in some incisive performances in the heats: he managed two third places, a fourth, a fifth and even a fastest lap, earning himself a start from the seventh spot on the grid for the Final. Disappointingly, an unfortunate contact during a rolling start (which was subsequently invalidated) jeopardised the final race of Stenshorne’s weekend, depriving him of the chance to battle for another excellent result.

Nikolay Violentii also gave some encouraging signs in OK. On his second appearance with the CL colours, the Russian driver gained even more confidence in the technical package and his performance consistently improved. In his last heat, the standard-bearer of the Leclerc by Lennox Racing team climbed three positions with respect to the start, posting a fastest lap time almost four tenths of a second quicker than the one set in qualifying, demonstrating that his learning curve is on a steep upward trajectory.

Caleb Gafrarar had his best weekend of the season in OKJ. The American driver posted the sixth fastest group time in qualifying and reaffirmed his competitiveness in the heats, also managing a sixth and an eighth place. Unfortunately, a retirement and some penalties in the other heats prevented him from competing for the qualification to the Final, but the speed demonstrated by the Leclerc by Lennox Racing team standard-bearer was very promising in view of the next rounds. Marcus Saeter‘s weekend wasn’t less brilliant, as he showed considerable progress. The young Norwegian came close to the top ten in his qualifying group. In the heats, he managed a sixth place, thanks to a nine-place comeback, and a tenth place, despite being then awarded a ten-second penalty that saw him slip down the standings. The standard-bearer of the Leclerc by Lennox Racing team saw his chances of making it to the Final fade away due to some turbulent heats, but his performance bodes well for the future.

The Leclerc by Lennox Racing team is already looking ahead to the next race, Round 2 of the Champions of the Future, which will be held at the Zuera circuit next weekend, from 16-18 July.
PRESS RELEASEDownload