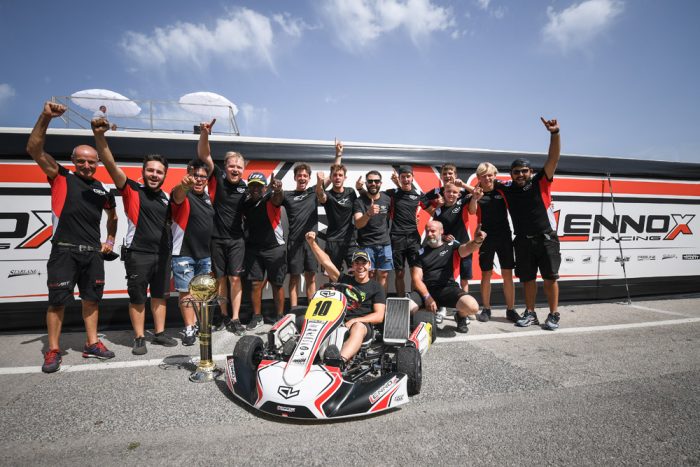 IThe Leclerc by Lennox Racing team concluded the WSK Euro Series with the icing on the cake. The CL chassis manufactured by Birel ART and powered by TM Racing proved proved extremely compe- titive in all classes, from MINI to KZ2.

In the shifter class, Pedro Hiltbrand was simply unstoppable. After achieving the sixth best time in the qualifiers and fourth place in the first race, the Spanish driver became the star performer of the class: he won both the remaining two heats and the pre-final, achieving the fastest lap in all races, and gained pole position for the final. In the final race of the weekend, the standard bearer of the Leclerc by Lennox Racing team dominated from lights-to-flag. Hiltbrand achieved the fastest lap for the four- th time in a row and celebrated his first success with the team.

Excellent performances in KZ2 for Laurens Van Hoepen as well. The Dutch driver proved his speed with the second best time in the qualifiers, just 47 thousandths from pole position, and then conti- nued with two fifth places and one eighth in the heats. The young rookie of the class achieved fifth position in the pre-final and repeated this good results in the final, despite being then demoted to eight place due to a five-second penalty. Jamie Day, who also had a positive weekend, came seventh in the qualifiers as well as in the first heat, and then always remained inside the top ten. The Leclerc by Lennox Racing team’s standard bearer finished his third race in the shifter class in ninth place.

Two weeks after the podium achieved in Round 2 of Adria, Martinius Stenshorne once again proved himself a protagonist in OK. The Norwegian driver achieved the third best group time in the quali- fiers and confirmed his position at the top of the rankings in the heats with two second places and
a seventh. After finishing the pre-final in fifth place, the Leclerc by Lennox Racing standard bearer started tenth in the final, but his start from the outside row penalised him and during the first lap he slipped to the middle of the group. Martinius did not give up and thanks to an excellent race pace he climbed back to 13th position. Another apprenticeship weekend, instead, for Oscar Aponte, who gained important experience on the Sarno circuit.

Also Matic Presa completed a weekend at the highest levels in MINI. The Slovenian driver started with the fourth best group time in the qualifiers and was then consistent in the heats: he was always in the top ten and and achieved a third place, a second and a fastest lap too. The Leclerc by Lennox Racing team’s standard bearer continued to express his competitiveness in the pre-final, which he finished fifth, and closed the weekend with a top ten finish in the final to reaffirm himself among the best drivers of the class.

Caleb Gafrarar and Marcus Saeter continued their development path in OKJ. Both gave encoura- ging signs in view of the upcoming events, including convincing comebacks both in the heats and in the pre-final.

The Leclerc by Lennox Racing team will see you at the next race, Round 3 of the FIA Karting Europe- an Championship OK-OKJ, which will always be held at the Circuito Internazionale Napoli in Sarno in the weekend of 9-11 July.