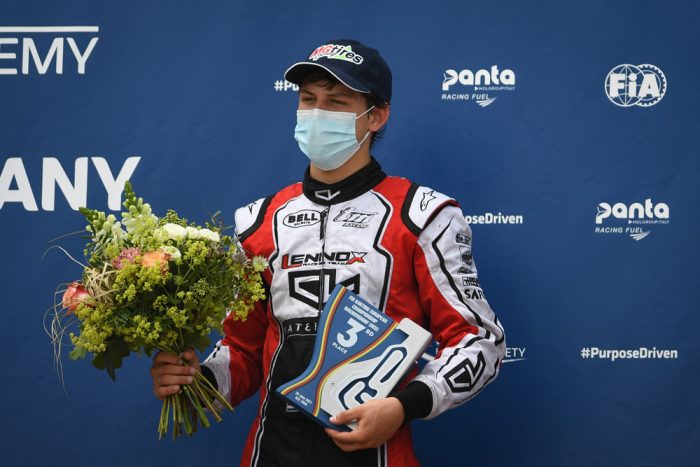 It was a special weekend for the Leclerc by Lennox Racing team at the Prokart Raceland circuit in Germany. TM Racing motorized CL chassis showed their potential in both classes, KZ2 and KZ.

Laurens Van Hoepen started his first FIA race in KZ2 with the group pole position and the second-best time overall in the qualifiers with 95 competing drivers. The Dutchman also remains incisive in the heats, where he won a fourth place, a third, a second and two victories, as well as a fast lap. In the final, although he competed with more experienced opponents, the young rookie managed to pull off a masterful race: he started third, but slips back to fourth on the first lap, and then returns to third place during the seventh round and put pressure on the driver in front of him up to the chequered flag. Van Hoepen crossed the finish line just three tenths from second place and thus got his first podium finish in KZ2 in his rookie season, proof of surprising improvement that sees him in third place in the championship.

A remarkable improvement also for Jamie Day, who at his debut in FIA in KZ2 managed the sixth best group time in the qualifiers. The UAE driver showed how competitive he is in the heats as well, always finishing in the top ten. Three five-second penalties because of the nose in an incorrect position made him lose ground in the overall rankings and the Leclerc by Lennox Racing team’s standard bearer found himself starting in 15th position in the final. The young debutant was not discouraged and recovered eight positions to end a positive weekend close to the top 20.

Axel Bengtsson also shows encouraging signs. The Swedish driver did very well in the heats, finishing three times in the top 15 and achieving a tenth place as the best result following an eight-position comeback. The standard bearer of the Leclerc by Lennox Racing team gained eight positions in the general rankings compared to the qualifiers, but unfortunately saw access to the final fade because of a few penalties, thanks above all to an unfortunate heat. Roman Sharapov also did well and despite a withdrawal recovered 21 positions in the general classification compared to the qualifiers. In his first appearance of the year with the Leclerc by Lennox Racing team, Maksim Soldatov achieved the 15th best group time in the qualifiers and subsequently gained important experience ahead of the next races. An apprenticeship weekend for Charlie Andersen in his first race of the season.

Pedro Hiltbrand was once again the protagonist in KZ. After gaining positions in all his heats, the Spanish driver took seventh place in the final and skilfully juggled the wetness to cross the finish line in sixth place to enter the top five in the championship. An excellent return to racing for Matteo Viganò, who confirmed his speed starting from the qualifiers. The Italian was unfortunately forced to retire in the first race, but in the second he finished third following a six-position comeback. Matteo was slowed down in the last race by a five-second penalty that due to the nose in an incorrect position and found himself dashing from seventh position in the final. In the final race of the weekend, Viganò took seventh place after recovering seven positions. Viktor Gustavsson also recovered seven positions, ending his first experience in KZ with a promising top 15 place.

The Leclerc by Lennox Racing team will be racing again as early as next weekend, 25-27 June, in Round 3 of the WSK Euro Series, which will be held at the Sarno circuit.