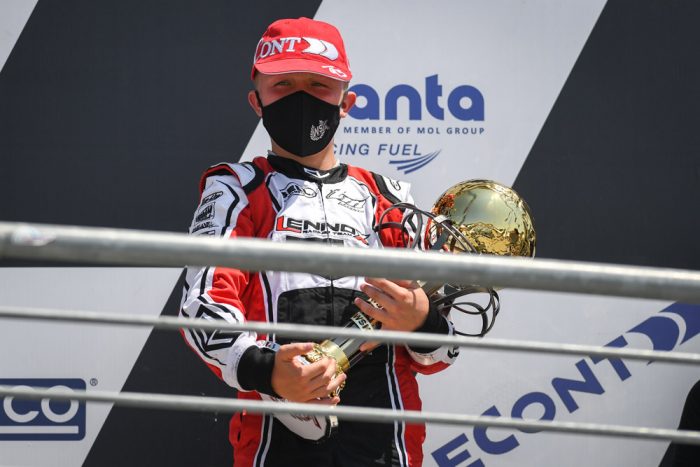 The Leclerc by Lennox Racing team had a very satisfying weekend at the Adria Karting Raceway circuit. The CL chassis produced by Birel ART and powered by TM Racing demonstrated their competitiveness in all classes, from MINI to KZ2.

In the premier class of single-speed karting, Martinius Stenshorne confirms his role as one of the main protagonists, starting with the group pole and the second fastest time in qualifying. Despite having the disadvantage of starting on the outside of the track, the Norwegian – who only recently joined the ranks of Nicolas Todt’s All Road management – also performed very well in the heats, finishing the first two races in second place and even posting a fastest lap. The consistency of the young driver was unfortunately interrupted by a retirement in the third heat due to a technical problem, which forced him to abandon the race on the first lap while occupying third position. The standard-bearer of the Leclerc by Lennox Racing team started the Pre-final in 11th place and climbed the field up to fifth position, which earned him the right to start on the third row in the Final. In the most important race, after a few frantic first laps, Stenshorne flew to his first podium finish in OK in his rookie season, which serves as proof of his continuing development.

The performances in KZ2 were also excellent. After setting the fourth fastest group time in qualifying, Pedro Hiltbrand completed the heats with a fourth, a third and a first place. The Spaniard even managed to take the Pre-final, posting the fastest lap, but was awarded a five second penalty due to the incorrect position of the front fairing. Starting from the 11th row, the standard-bearer of the Leclerc by Lennox Racing team confirmed his competitiveness in the Final and climbed three positions, despite being then awarded a second penalty. His teammate Laurens Van Hoepen was also incisive, starting with the sixth fastest group time in qualifying. The Dutchman missed out on the third place obtained in the first heat due to a penalty and retired in the second, but finished fifth in the last and posted the fastest lap. The Leclerc by Lennox Racing team driver gained two positions in the Pre-final and made it into the top ten, while in the Final he managed to climb an impressive nine places to grab 11th. Viktor Gustavsson was competitive, but unlucky and, following a few difficulties both in qualifying and in the heats, managed to climb eight places in the Pre-final and another seven in the Final to cross the finish line close to the top 15.

A five second penalty deprived Axel Bengtsson and Jamie Day of the opportunity to race the Final. However, both the Swede and the driver from the United Arab Emirates, the latter making his first appearance of the season and his debut in the premier karting class, gave encouraging signs in view of the upcoming events. It was also a weekend of apprenticeship for Roman Sharapov, who clocked some useful track time in his second race of the year.

There was also a lot of speed on show in the MINI class. After a complicated qualifying session, Matic Presa started all his heats on the sixth row and always managed to finish in the top ten, only to be pushed back on one occasion due to a penalty. The young Slovenian also boasted a win along the way, thanks to a ten-place comeback, and confirmed his position at the top of the standings with a seventh-place finish in the Pre-final. Unfortunately, the standard-bearer of the Leclerc by Lennox Racing team was forced to abandon the Final while he was fighting for a place in the top 15.

Marcus Saeter and Caleb Gafrarar gained further experience in OKJ. Both produced good performances in the heats and further demonstrated their progress with convincing comebacks in the Pre-final.

The Leclerc by Lennox Racing team will already be back out on track next weekend, June 18-20, for Round 2 of the FIA ​​Karting European Championship KZ-KZ2, which will be held at the Wackersdorf circuit.