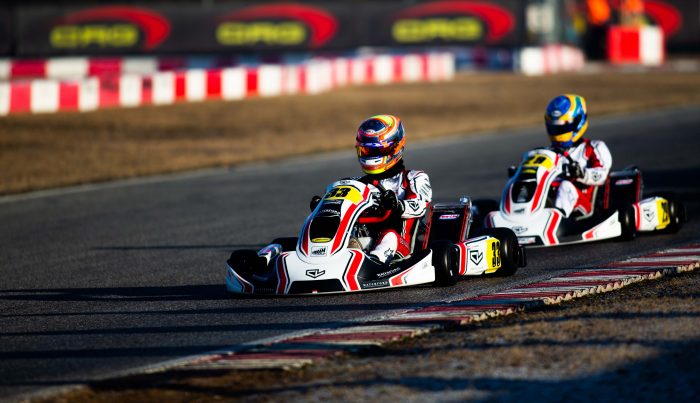 Competitive weekend for Charles Leclerc by Lennox Racing at the South Garda Karting in Lonato. The British team stood out in terms of speed and competitiveness, influenced by a few unlucky episodes.

Making his debut with Charles Leclerc’s equipment, Gerasim Skulanov was unable to show his true potential during the weekend, due to a rib problem he had after Thursday’s free practice. The Russian only made it through Friday’s qualifying, Friday’s heats and Sunday’s Prefinal B, where he set a very good pace, recovering from last position up to 16th.

Good speed for our seniors, able to get the best out of material at their disposal. A bit of bad luck in the heats for Angelard prevented him from reaching the Final. Schaap and Modonese made it to the final, but some contacts at the start compromised their first WSK weekend.

KZ2 – Close call for the podium in the shifter class

An almost perfect weekend for Tom Leuillet, who was among the fastest on track in all phases of the race. Unfortunately, a few laps before the end of the final, he was forced to retire while he was in 2nd position, immediately after setting the fastest lap. Fantastic recovery for David Liwinski in the Final, 17th under the chequered flag with 12 positions recovered. A shame for Laurens Van Hoepen who, despite his competitiveness, ended his weekend in 28th position due to a 5-second penalty for the front fairing. Simonini and Nadolski missed out on getting into the final, but their performance was a crescendo throughout the weekend.

Jordon Lennox-Lamb, Team Manager:
“It was an ups and downs weekend for us, despite the good potential. For sure in all classes we have shown that we had the pace, but this time we lacked a bit of luck. We are aware that we can fight for the podium, so I feel confident for the next races.” The next appointment for the Lennox Racing team will be in two weeks time, again in South Garda Karting in Lonato for the second round of the WSK Super Master Series.