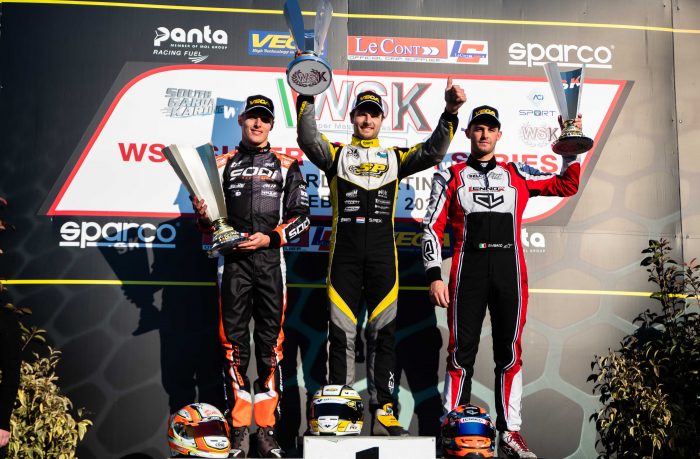 Another competitive weekend for Charles Leclerc by Lennox Racing at the South Garda Karting in Lonato. The British team achieved a well deserved third place with Matteo Viganò in KZ2, reconfirming its potential in the shifter class.

OKJ – Skulanov on the rise

Gerasim Skulanov’s weekend was positive, despite not making it to the final. The young Russian set a really good pace in the qualifying heats, recovering many positions from the start after a difficult qualifying. Unfortunately, too many contacts compromised his Sunday.

OK – Good weekend for Schaap, not the best for Modonese and Angelard

Another bittersweet weekend for our senior drivers. Nathan Schaap was able to react after a complicated qualifying and heats, taking a well deserved 16th position in the Final with 15 places recovered. Unfortunately Modonese and Angelard were not able to perform at their best, but their performances were very encouraging.

KZ2 – Viganò on the third step of the podium

On his return to the track, Matteo Viganò didn’t miss, taking a deserved 3rd place after a thrilling final. Good recoveries for Liwinski and Van Hoepen, respectively in 6th and 11th place in the Final. At his debut with our colours, Ekelchik ended in 24th position, while Leuillet, Sharapov, Nadolski and Simonini had to face several unfavourable situations, preventing them from performing at their best.

Jordon Lennox-Lamb, Team Manager: “We got the podium that we missed a couple of weeks ago. I’m very happy with the work the guys have done, the efforts are starting to bring the results we want. We are on the right direction.

The next appointment for the Lennox Racing team will be in two weeks time in Franciacorta for the Champions of the Future Winter Series.