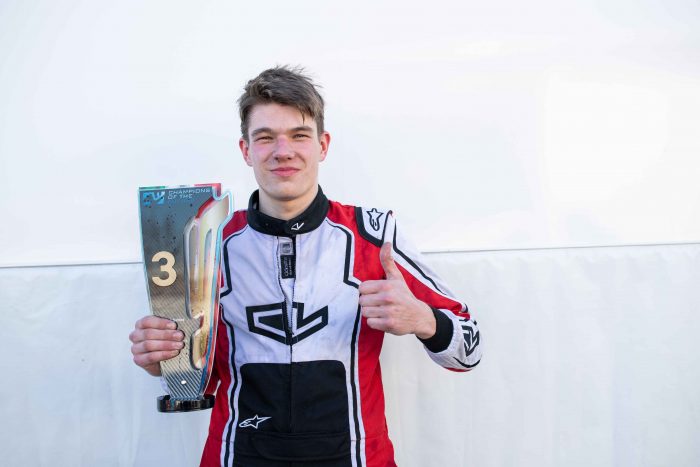 Several drivers from the team had really good performances on the Italian track.Great satisfactions came above all from the KZ2 category, with three drivers classified in the top 10 of the final.

A strong 3rd place has been reached by David Liwinski, also the owner of the second-best lap of the race. His weekend was extremely solid right from the start: first time in the Warm-Up, third place in his Super Heat at less than a second from the first.

Laurens Van Hoepen (4th) and Tom Leuillet (8th) were always fighting for the top positions and showing great confidence with the material. Laurens, in particular, went for an exciting Super Heat, which ended in third place two tenths from the winner, and also a great race in which the podium was so close.

Sharapov and Kulashenko finished 20th and 21st, 31st place for Simonini, still managing to improve their pace race after race.

Rafael Modonese instead shone in the OK Senior category, gaining 12 positions and finishing 7th after a great comeback. He has been able to recover well after the difficulties encountered in the Super Heats closed in 19th place, showing a lot of mental strength on track. Angelard placed 33° after some unlucky situations. Skulanov’s weekend in the OK-Junior category stopped in the Super Heats. Anyway, the sensations offered by the racing package on such a demanding track were convincing.

Jordon Lennox-Lamb, Team Manager: “Our weekend has been good, but we can’t be completely satisfied. We know we have room for improvements and we will work for a significant step forward already in Sarno. The atmosphere in the team is very positive, we all work to reach the top of our potential”.

The next appointment for the Lennox Racing Team will be the last round of WSK Super Master Series, which will be held in Sarno – Circuito Internazionale Napoli.