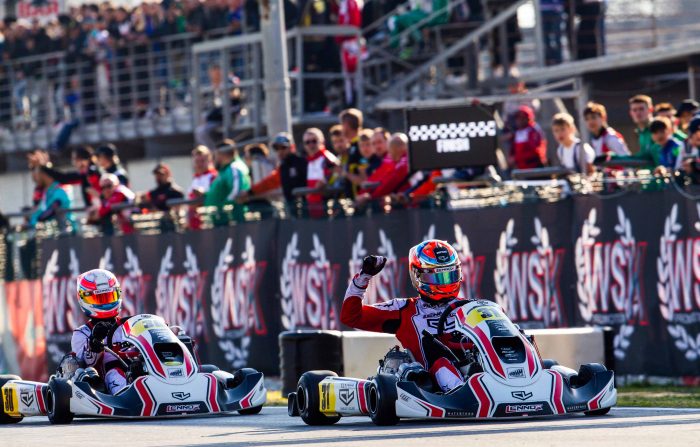 A historic double in KZ2 category gained at Circuito Internazionale Napoli has been the due recognition for all the efforts of the team. This was just the brightest result of an extremely solid weekend: in all categories drivers and team staff gave everything they could, reaching great results.

Matteo Vigano was the real protagonist in Sarno. Always in the leading group during all the race, Matteo built his victory step by step in the weekend fighting hard and demonstrating how fast he has become, thanks also to top quality materials. Tom Leuillet was also brilliant on track: the French driver remained for all the race together with Matteo, placing 2nd at only 0.154 and gaining also the third best lap of the race. Matteo and Tom have been amazing in their way to front such a technical race track, managing not to make any mistake: a well deserved 1-2 in the shifter class.

Solid performances in KZ2 category also for David Liwinski, Laurens Van Hoepen and Ivan Ekelchik. David has been really consistent in his driving style and able to manage all the difficult moments, placing 6th at the end. The 9th place was not the result Laurens was looking for, but the dutch driver has been an authentical crack in all the qualifying practices (getting the pole position) and heats with some really fast laps. An insane speed confirmed even during the final stage, in which Laurens earned the second best chrono. Important signs of growth also for Ivan, able to make a great comeback and placing 12th.

Rafael Modonese, Nathan Schaap and Maksymilian Angelard had a good chance to improve and show their skills in OK category. Rafael was also able to take part at the final race, placing 34th and gaining even more experience In such a hard championship. Platon Kostin and Andrja Vibriantyte were involved in one of their first experiences on track and made great efforts: choice to bet on these drivers is the proof that the team always tries to extend his range, even in women’s motorsport which represents a great opportunity. Good signals also by Gerasim Skulanov in OK Junior Category.

Jordon Lennox-Lamb, Team Manager: “For me and for the team this race in Sarno was really special and different by others. WSK Super Masters Series is an extremely competitive championship and placing a 1-2 in Sarno is the proof that we are a great team. Matteo and Tom did a fantastic job on track, showing off their incredible qualities and making us proud of them: this result is the right reward for them. Now our goal is to make this success a starting point and continue to improve in all possible aspects”.