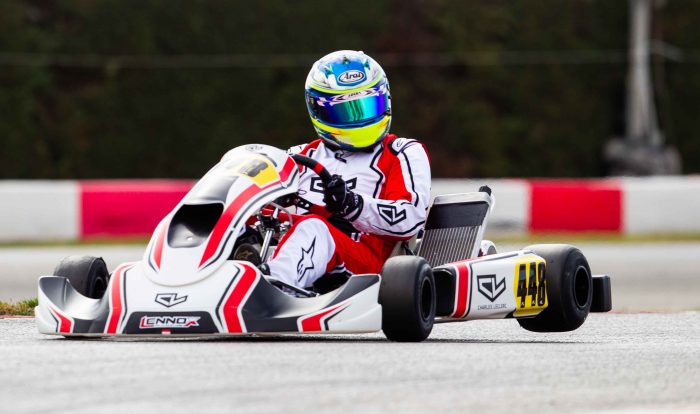 Hard weather conditions and some unlucky situations made everything complicated for Kacper Nadolski and Axel Bengtsson in KZ2 and Andrew Torti in X30 Senior.

Nadolski showed at South Garda Karting a satisfying pace from Qualifying Practices, then ending all of his heats into the top 20 on Saturday, but then the repechage didn’t turn out as planned, closed in 24th place. Bengtsson performed consistently on Friday, having some difficulties during Qualifying Heats but then he was able to gain 11 spots during the Repechage, finished 20th. Both Kacper and Axel have been unlucky in some crucial moments, but they never give up during the whole weekend.

Torti competed with great drivers and was able to show good things on track despite tricky weather and track conditions. The Australian driver closed 47th in Qualifying Heats, confirming the placement achieved during practices; Andrew did his best even during the repechage on Sunday morning, ended 19th.

Jordon Lennox-Lamb, Team Manager: “Of course we can’t be completely satisfied about our results at the Margutti Trophy, but drivers and team gave it their all, trying to do their best in such difficult conditions. We have been able to collect a lot of indications before the next appointments: we want to be ready and I’m sure we will be at our best soon”.

Now the team will focus on the next events, starting from the kick off round of the European Championship in Portugal.