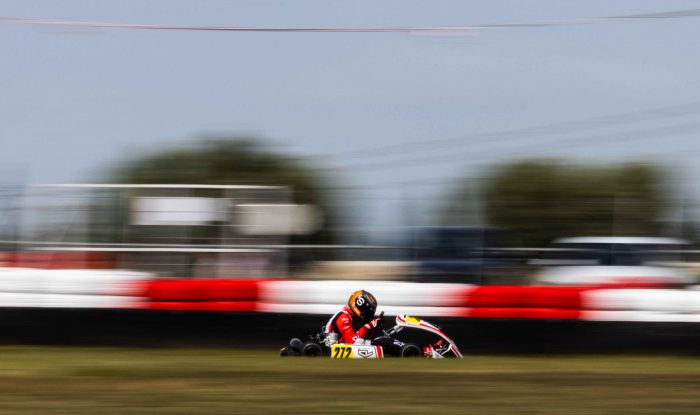 In Zuera the purpose of the team was to collect as many indications as possible in view of the second round of the CIK-FIA European Championship. The team was represented in OK Junior by Gerasim Skulanov, Aaron Garcia and Luca Houghton, at his debut with the team. Rafael Modonese, Nathan Schaap, Maksymilian Angelard and Andreja Vibriantyte were involved instead in the OK category.

Friday has been a positive day in both Qualifying and Heats. The overall speed was convincing, especially in the OK Junior category: Garcia and Skulanov found a satisfying pace and also Houghton, despite it being his first time with our team, showed an interesting pace on track.

Aaron and Gerasim were also extremely competitive on Saturday, with two placements in the top ten each, concluding respectively P25 and P26. Luca gave it all and took P44, reaching also a top ten during one of the Qualifying Heats. In the OK class drivers fought hard, showing personality: Schaap was the best in 46th position, followed by Modonese (48th), Vibriantyte (59th) and Angelard (60th).

On Sunday our drivers had good speed. Once again the OKJ category was the best for us: Skulanov and Garcia grabbed the access to the Final and made good comebacks. Skulanov made up 9 places finishing P16, while Garcia took 18th position with 8 positions recovered: for both of them pace turned out really similar to most of the top ten drivers.

Houghton closed his Super Heats in P52, showing a great attitude for learning. In the OK category there’s instead a big room of improvements for us: Modonese placed P45 in Super Heats, while Schaap, Vibriantyte and Angelard closed respectively P47, P59 and P61.

Jordon Lennox-Lamb, Team Manager: “Our main target for this race was to find some responses for the European Championship that will be there in Zuera in two weeks. Of course we can’t be completely satisfied with our results but I saw the right attitude from all drivers and members of the team: I’m sure that we’ll see some good results on track”.