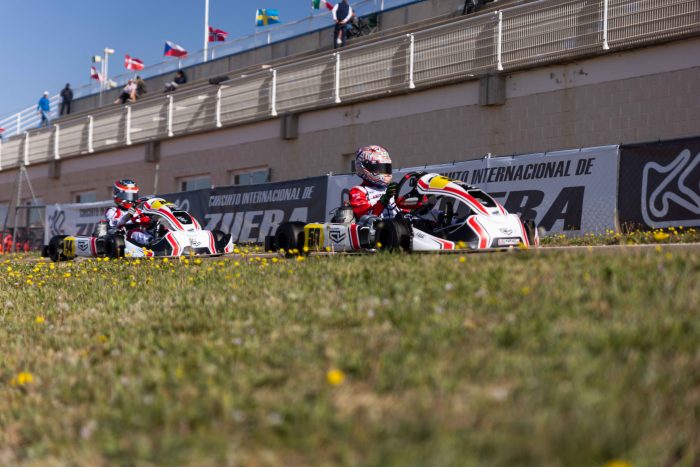 In Zuera weather conditions have been very hot and windy. The team was represented in OK Junior by Gerasim Skulanov and Aaron Garcia. Rafael Modonese, Nathan Schaap, Maksymilian Angelard and Andreja Vibriantyte were involved instead in the OK class.

The weekend proved extremely busy from Friday. Our drivers did their best on track to find the right setup and showed up with a satisfying feeling on the track: Skulanov and Garcia closed the OK Junior Qualifying on 14th and 17th.

In OK class Modonese showed positive speed and was able to conquer P21, ending very close to the best lap; Vibriantyte, Angelard, and Schaap had some difficulties but still tried their best, reaching respectively P55, P58 and P65.

Aaron and Gerasim were involved in some hard and exciting battles on track on Saturday during the OKJ Heats, but some crashes cost them the chance to get better placements. In the last Heat, unfortunately, Skulanov got a broken wrist that did not allow him to continue to drive: Gerasim closed 25th overall but didn’t take part in the race on Sunday. P28, instead, for Aaron Garcia after the heats.

In the OK, good improvements after the heats for Schaap (P47) and Vibriantyte (P50), while Modonese (P55) was involved in two crashes which compromised his ranking. Positive attitude despite difficulties for Angelard (P65).

On Sunday our drivers weren’t able to reach the final stage, but especially in OK there have been some steps forward: in Super Heats Angelard and Vibriantyte both hit a top20 placement, while Schaap closed in P21. Modonese was unfortunately forced to retire again during his Super Heat.

Jordon Lennox-Lamb, Team Manager: “First of all I want to wish Gerasim a speedy recovery: he’s a fighter and a great driver and I know that he’ll return even stronger on track. Of course, it hasn’t been an exalting weekend, we didn’t show our best on track and we’ve also been incredibly unlucky in some situations. We must be able to take the good even from a negative result and come back stronger: the season is long and we’ll for sure have our opportunities”.