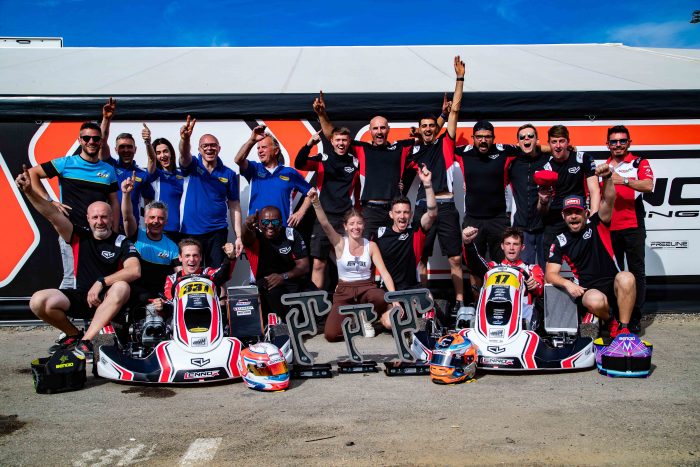 In Genk, on a very challenging track with perfect weather conditions, the team was represented in KZ by Matteo Vigano and in KZ2 by Tom Leuillet, Nathan Schaap, Axel Bengtsson, Kacper Nadolski, Mattia Simonini, and Ivan Ekelchik.

Tom Leuillet has been the real protagonist of the KZ2 weekend. The french driver maintained an unattainable pace for the opponents from Friday to Sunday: Tom scored the Pole Position of his group, best lap in all his qualifying heats and defended hard his pole position gaining a second place in the Super Heats. In the Final Leuillet managed to do even better, dominating the race after a perfect start from P1 and concluding also with the fastest lap of the race: an impressive showdown for a well-deserved victory.

Great weekend also for Matteo Vigano in KZ class. Matteo has been able to find a good feeling with the track from Friday, traducing all his positive sensations in 2nd place after Qualifying Heats. After some difficulties during the Super Heat Matteo built a solid race, battling hard from start to finish for leading positions and reaching a precious 3rd place: a podium that repaid him for the excellent job done with the team.

A quick reminder also about the performances of our other drivers involved in the KZ2 category. Ivan Ekelchik reached a good result in Qualifying Heats, finishing P19 and gaining a strong top twenty. Some difficulties despite a commendable attitude also for Nadolski (56th), Bengtsson (69th), Simonini (79th), and Schaap (81th).

Ekelchik did a great job also in Super Heats, placing 16th overall, but in the end, he had some problems during the Final, placing P25. Unfortunately, no one of our other drivers was able to take part in the Final.

Jordon Lennox-Lamb, Team Manager: “Stunning results from Tom and Matteo pay off all our efforts and prove that our team is composed of people who work hard every day trying always to win. Tom’s weekend has been simply perfect and I was impressed by the spirit put by Matteo on track. I’m so proud of all our guys and I hope that this result will be a starting point for us, in order to improve constantly during such a hard season”. In Zuera weather conditions have been very hot and windy. The team was represented in OK Junior by Gerasim Skulanov and Aaron Garcia. Rafael Modonese, Nathan Schaap, Maksymilian Angelard and Andreja Vibriantyte were involved instead in the OK class.