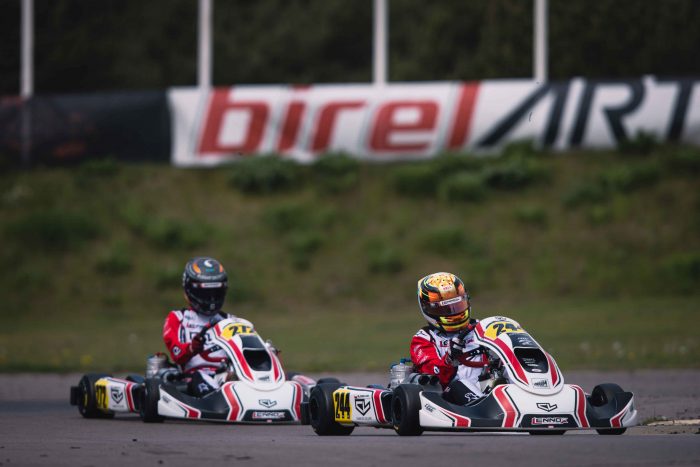 Kristianstad has been a hard challenge for the team, due to the conformation of the track and tricky weather conditions. The team was represented by Aaron Garcia in OK-Junior class and by Rafael Modonese, Maximilian Angelard, and Nathan Schaap in the OK Senior class.

Garcia did a good job during the weekend. The Spanish driver kept a noteworthy pace in both wet and dry conditions, despite some difficulties in finding the best feeling on the track. After P25 in Qualifying Heats with two top 10 placements, Garcia got P21 in the Super Heats, qualifying for the Final.

The race started in dry conditions, but after 9 laps a torrential rain created unsustainable conditions for the drivers, forcing the race direction to show the red flag in a few laps. Aaron crossed the finish line 24th.

Uncertain weather conditions were extremely complicated to the front even for our drivers of OK Senior. Modonese, Schaap, and Angelard closed respectively in P43, P48, and P64 through the Heats after some difficulties during qualifying on Friday.

On Sunday all our three drivers did their best during the Super Heats, but they weren’t able to reach a spot in the Final due to several contacts. A shame for our drivers, who demonstrated once again great attitude on track, collecting a lot of data in anticipation of the next round of the CIK-FIA OK/OKJ European Championship.

Jordon Lennox-Lamb, Team Manager: “Honestly we expected that weather conditions could be extremely difficult to deal with. I want to say thank you to the drivers and the team: they did a remarkable job, especially in collecting as much data as possible for the European Championship, I’m sure that we’ll continue to improve and soon results will arrive as a reward for our hard job.”