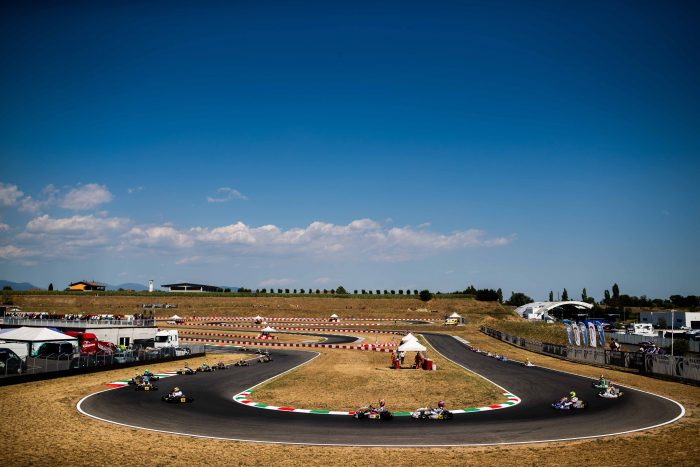 The Franciacorta stage proved to be hard and full of difficulties. Our team was represented by Aaron Garcia and Gerasim Skulanov in OK Junior category and by Rafael Modonese and Andreja Vibriantyte in the OK category.

In OKJ our drivers were able to find a good speed immediately during Qualifying Practice. Skulanov found the right feeling with the track: Gerasim showed good speed and caught 5th place in his group, placing 13th overall.

Garcia worked hard to reach the right pace but had more difficulties, placing P13 (38th overall). Good job by Modonese in the OK category with a P9 in his group (25th overall), while Vibriantyte placed last due to some difficulties with her set-up.

In OKJ Qualifying Heats, Skulanov was one of the most consistent on track: Gerasim drove with great attention, reaching the top 10 in every single heat and catching a well-deserved P8 in the intermediate classification. Garcia started well with two top 10 placements in his first three Heats but had issues in others: all these problems cost him a P45 overall.

Remarkable steps forward for Modonese during the OK Heats with four top10 placements and missing the last one for a penalty only: Rafael ended in P21 overall, showing significant improvements since the last races. Vibriantyte fought as hard as possible finishing P62. Sunday has been really unlucky for the team.

In OKJ Skulanov reached the Final in P18 after a difficult Super Heat, but was forced to retire from the Final after contact during the fourth lap. Garcia instead concluded 41st after the Super Heats and wasn’t able to qualify.

In OK Modonese continued to show a good feeling with his CL and fought hard in his Super Heat for a well-deserved P8. Rafael went in the Final with the 18th slot but hasn’t been able to start due to a technical issue. Vibriantyte finished her weekend with 65th place after the Super Heats.

Jordon Lennox-Lamb, Team Manager: “This certainly was not the way I was hoping to end the European Championship. I have to say that this weekend we found the right workflow, then bad luck did the rest. I’m so sad for Gerasim and Rafael, they ran well and they deserved a different result. Now our heads must be on the second half of the season.”