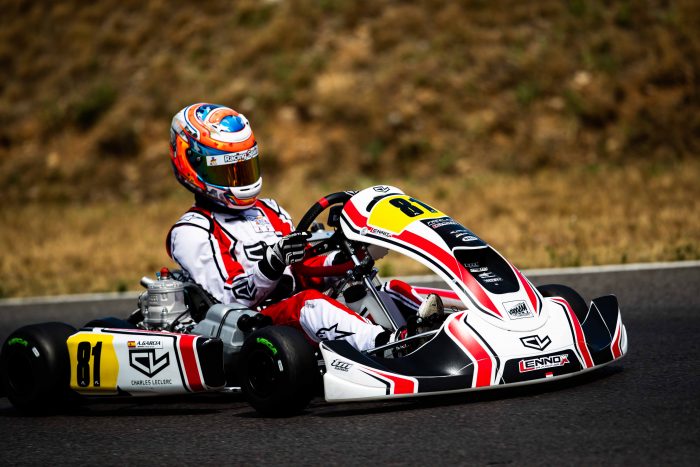 In Franciacorta the hot weather conditions were a key element and forced drivers to deal with some hard situations. The team was represented by Aaron Garcia in the OK Junior category and by Rafael Modonese and Maksymilian Angelard in the OK category.

The weekend looked difficult straight from Friday for our drivers, who worked hard to find the right set up on such hard track conditions. Garcia had some issues and closed his practice group in P21, placing 63rd overall. In OK Modonese closed his group in P8 (23rd overall), while Angelard placed in P18 (52nd overall).

During the first two OKJ Qualifying Heats Garcia has been fast since the beginning, collecting a P12 and P9. On Saturday the Spanish driver had to deal with some unlucky situations, despite a satisfying pace. He placed 45th in the standings after the heats. In the OK Modonese started in a great way with 4th place in the first heat, one of his best performances of the season.

An unlucky contact under the rain forced him to retire in the second one, but Rafael was able to recover and reached other two top10 placements in the last two Heats ending 18th overall. Angelard had a few more difficulties and struggled a bit to find the right pace: Maksim finished not so far from top ten twice and placed 51st after the heats merge.

In the Super Heats Aaron Garcia was fast but not enough: the Spanish boy has been a bit unlucky and he concluded 43rd overall, missing the Final. Strong speed instead by Modonese in OK: Rafael confirmed the good pace shown for the whole weekend, ending the Super Heats in 19th place and giving it all in the Final securing a well deserved 18th place. Few steps forward also for Angelard, who however didn’t qualify for the Final.

Regardless of the results, Franciacorta weekend has been extremely important for the team, who collected a lot of important datas and information in view of the next and last round of the CIK FIA OK/OKJ European Championship.

Jordon Lennox-Lamb, Team Manager: “Considering everything I think that we had a positive weekend. I saw a lot of improvements by our drivers, who worked hard with the team to find the best solutions. Of course we know that we need something more to take a satisfying placements in the European Championship, but I’m sure that we’ll be ready: we have the potential.”