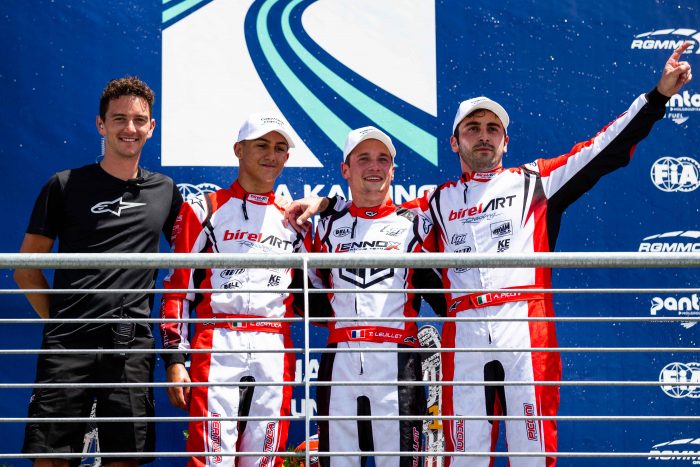 The CIK-FIA European Championship ended up in a spectacular way in Cremona in the first appearance on the calendar for the Italian track. Lennox Racing Team team was represented by Tom Leuillet, Kacper Nadolski, and Nathan Schaap in KZ2 Category and by Matteo Viganò in KZ Category.

Tom Leuillet ended his brilliant campaign in the best possible way. The French driver started by setting the second-fastest lap time in Qualifying before winning the first heat, but he was dropped back to 13th due to a fault start and a bumper penalty.

Tom wasn’t affected at all and took three victories and a third place in the remaining Heats, showing a huge consistency and a remarkable speed. Leuillet handled perfectly the Final, leading the last 9 laps and concluding with a 1.5” lead with the fastest lap also.

Matteo Viganò went also close to the European crown, but in the end, he concluded the championship in 2nd place.

The weekend didn’t start in the best possible way for Viganò, who ended 14th in Qualifying before recovering five spots and ending 9th with also the fastest lap of the race. In Heats the Italian driver kept improving and took much more confidence with the track, securing 5th place overall.

In the Final Matteo gave everything on track, moving up to the third position and becoming the Vice-European champion.

Cremona has been hard to deal with for Nadolski and Schaap: both of them did their best and fought hard, but weren’t able to get into the Final.

Super heats have been canceled for security reasons due to high temperatures: race direction took this decision to allow the competitors to have good tire conditions for the Qualifying Heats.

Jordon Lennox-Lamb, Team Manager: “This result pays off all the efforts of our team during such a hard season. I’m so happy for Tom, no one deserved this title more than him: after the bad incident in Lonato last year we all knew that he would return to compete at the highest levels and he repaid our trust in the best possible way. I also want to congratulate Matteo, who fought hard all the season and went very close to winning the title. I’m proud of these drivers and this team, I couldn’t be happier right now”.