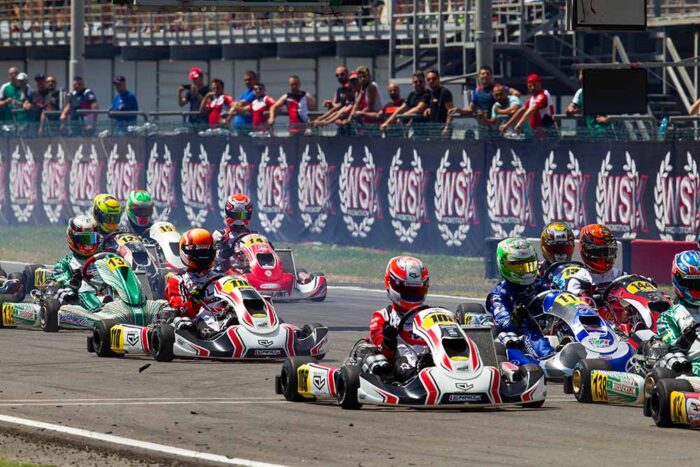 In OKJ Skulanov showed satisfying pace and confidence for most of the weekend. After P11 in his Qualifying group (P32 overall), he put on great effort during the Heats starting with two top10 placements on Friday and concluding with two 4th places on Saturday. Skulanov was on point also in the Prefinal, recovering three positions and securing the 14th spot on the grid for the Final, in which however due to some difficulties and a 5 seconds penalty he crossed the line 26th. Ageev (P61) kept moving his first steps with the team, with a remarkable desire to learn and improve.

Modonese was the most performant of our drivers in OK. Rafael started the weekend nicely: he took P14 in his Qualifying practice group (P27 overall), then closed the heats with two top15 placements out of three despite some difficulties in finding the right pace. After a disappointing Prefinal on Sunday the Peruvian driver ended in the best possible way with a great comeback in the Final, gaining fourteen spots and concluding 18th. Good efforts also from Angelard despite some lack of speed: Maxim concluded in P50 after Prefinal, missing the qualification in the Final.

Remarkable job in KZ2 for Ekelchik, which stayed on the high level of performance shown in the last few races. Ivan was able to confirm his 11th place gained in practice also after the heats with two top10 spots out of three, but most of all he raced a brilliant Final recovering five spots and showing a remarkable speed on the track. His final 9th place confirms all positive steps forward made in last few weeks. Another tricky weekend instead for the reigning European Champion Leuillet. Tom started setting the 10th fastest time lap in Qualifying Practice, then improved a lot during heats, especially in the second one in which he recovered five spots crossing the line in P7. The French driver kept his level also in the Prefinal (P8) before a disappointing final with a lot of difficulties and tricky situations: Tom had to settle for 14th position. A bit of disappointment for Schaap (P26) and Glerum (P30), while Metsker (P22) after a difficult start has grown steadily during the weekend.

The final WSK Euro Series stage in Sarno is over: the team used it to collect as much data as possible, especially in sight of the World Championships.

Jordon Lennox-Lamb, Team Manager: “Another weekend of hard work for our team and our drivers. I’m quite satisfied with what I’ve seen in Sarno, despite some situations that have left us with a bitter taste. Now we’ll have some rest before a period full of races, in which we want to be at our best”.