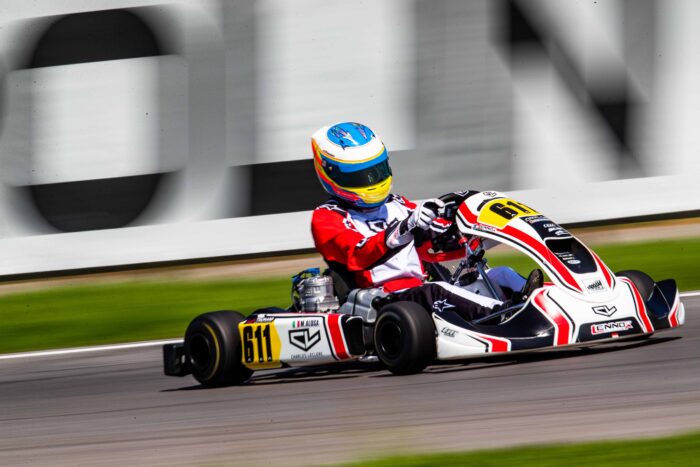 In Sarno, our team was represented in OK Junior by Peter Ageev and Zoe Florescu while in OK by Rafa Modonese, Giuseppe Guirreri, and Massimiliano Alosa.

In OKJ we didn’t have an exciting weekend, even though our drivers put remarkable effort into their work on and off the track. Ageev and Florescu didn’t reach the top20 placement in qualifying. A bit more difficulties, however, for our drivers on Saturday: Peter and Zoe closed respectively P47 and P45 after some hard heats. Unfortunately, both of them weren’t able to take place in the final on Sunday.

In OK Modonese appeared to be back in good shape from the summer break. We had good responses during Qualifying Practices from him, fighting hard and crossing the line close to the top 10. Rafa, who started from P11 in Prefinal, found an astonishing pace and after an incredible comeback took a deserved 3rd place (P2 after the official results). Unfortunately, the final didn’t go as expected: in extremely hard conditions due to the heavy rain Modonese was involved in a contact that forced him to retire from the race. A lot of improvements for Guirreri, who faced all the difficulties with a positive attitude. In the Final, he showed the pace in line with the best that could certainly have taken him in top10. Unlucky Alosa was immediately out of the game due to a rib injury.

The 4th round of the Italian Karting Championship in Sarno is finally in the archives: the team used it to collect as much data as possible, with the aim of arriving as prepared as possible at the OK/ OKJ World Championship.

Jordon Lennox-Lamb, Team Manager: “Another weekend in the bank, another chance to understand where we are. I have to say that I’m pretty satisfied, even if the results weren’t exciting: I really appreciated the workflow of drivers and the team, the atmosphere is positive and I’m convinced that we’re ready for the World Championship.”