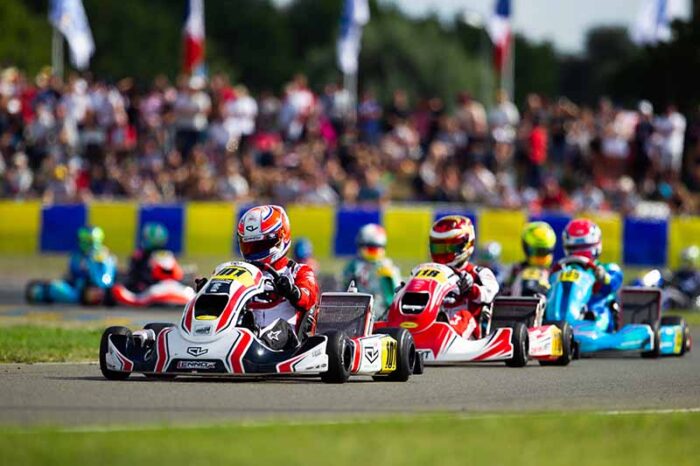 On the historic circuit of Le Mans competition turned out to be fierce and of the highest level, thanks also to the energy of an extraordinary public. Our team was represented by Matteo Viganò in KZ and by Tom Leuillet, Ivan Ekelchik, Nathan Schaap, Kacper Nadolski and Robin Glerum in KZ2.

In KZ Vigano didn’t start out well his weekend: the Italian driver gave his all already from qualifying practice, despite a bit of lack of performance. Matteo didn’t manage to go beyond 14th position of his group (P27 overall), but he improved his pace a lot already in the heats with two top ten placements out of three heats, thanks also to the excellent job of the team: he finished his Saturday with a final P20. On Sunday a penalty did not prevent Matteo from obtaining a P8 in Super Heat B, which guaranteed him P19 on the final race’s starting grid: after an astonishing effort and a lot of entertaining battles on track, Viganò concluded his world championship 15th place.

In KZ2 all our drivers worked hard to find the best possible pace already from Friday with satisfying results. Tom Leuillet found good responses in qualifying practice, catching 3rd place in his run (P10 overall) with lap times on the same level as the best ones. A bit more difficulties for the other CL Boys: Ivan Ekelchik showed positive things and placed 53rd. Glerum (P71), Nadolski (P73), and Schaap (P108) were more detached, but they all showed good room for improvement during the whole weekend.

Luck, however, was not on our team’s side and the weekend turned out to be even more tricky, also due to extremely variable weather conditions that made everything more complicated. All drivers had some problems in the heats but never stopped to try to do their best: Leuillet didn’t feel comfortable with his setup but was able to find a way to catch a top 20 placement closing 16th. Considerable improvements for Glerum and Ekelchik, who looked decidedly at ease and found a remarkable speed in order to place respectively 48th and 49th, while Nadolski (P67th) and Schaap (P102) were further away from the leading group, despite top10 lap times.

Even Sunday was not the best of the days for us, but there are some positive aspects to consider. Leuillet was once again the best, but also for him there was no lack of difficulties: Tom closed 14th after the super heats and was the only one in our team to qualify for the final in KZ2, in which he secured a positive P10 despite of some penalties and a tricky race. Significant steps forward for the others: none of them got a place in the final, but all of them kept the pace in line with the best on track. The best one in the Super Heats turned out to be Glerum (P46), followed by Ekelchik (P48), and Nadolski (P67); no placement for Schaap in the Super Heats.

Jordon Lennox-Lamb, Team Manager: “After a season where we dominated in almost every race, I’m not complaining about the result of this world championship, even though it did not go as it should. I am proud of the job done by the guys and the attitude of the drivers, we gave everything we had.”