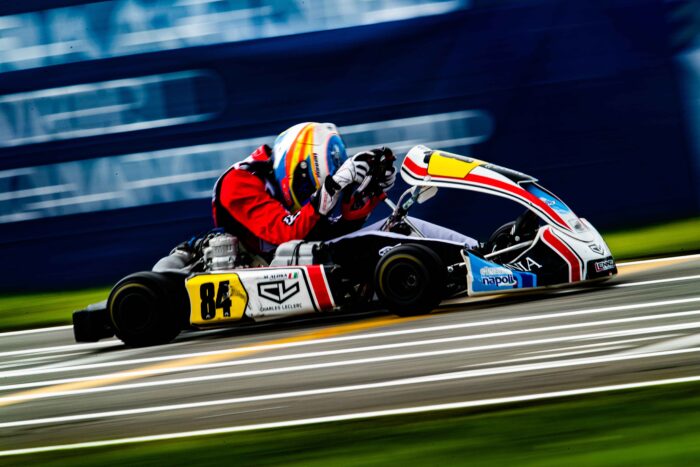 Circuito Internazionale Napoli represents always an exciting challenge for the best young drivers and the OK/OKJ World Championship was no exception. Our team was represented by Gerasim Skulanov and Petr Ageev in OKJ and by Rafael Modonese, Maksymilian Angelard, and Massimiliano Alosa in OK.

In OKJ our drivers have shown huge signs of improvement despite tricky weather conditions. Since Friday both Skulanov and Ageev put on track one of their best performances of the season: Gerasim closed his qualifying practice group with an astonishing 1st place of his group (P4 overall), while Petr took a solid 4th position less than a tenth of a second from his teammate (P16 overall).

Skulanov’s pace turned out to be huge also in qualifying heats and guaranteed him 10th place overall: Gerasim fought hard in all seven heats, winning two of them and finishing always in the top 10 apart from a 19th place caused by a bumper penalty. Even Ageev gave everything on track despite some unlucky situations, placing five times out of seven in the top 10 and gaining a good final P27.

Sunday didn’t start in the best possible way for us: Ageev had some difficulties in Superheat A and crossed the line in P22 despite his attempts to stay as much as possible in the leading group, while Skulanov took P10 in Super Heat B. However, it’s great to notice how Gerasim changed his momentum in the Final: he switched into his best mode since the start with very aggressive moves and then has been the protagonist of a great comeback up to a 3rd place finish after leading the pack for several laps. Unfortunately, a painful bumper penalty relegated Skulanov to 9th place. Bad luck also for Ageev: Petr was involved in a contact that dropped him back to 33rd place.

In OK our drivers had a remarkable attitude, but luck appeared to be not on their side. Modonese turned out to be the fastest since Friday, securing the 44th placement overall in qualifying practice; he fought hard also during all the heats and, despite an unlucky contact in the second one, he didn’t give up and secured a top10 placement in the fourth one. Unfortunately, Rafael’s weekend ended prematurely in the superheats due to a contact. Unlucky race for the Peruvian driver, who was unable to play his cards in the final.

Positive feedback from Angelard, who started very well in qualifying practice with 13th place in his group (P50 overall). Maksymilian kept the same pace also during the heats, but has been a bit unlucky and failed to confirm himself into the Final. Good job from Alosa, who showed significant steps forward despite his lack of experience with the race package: Massimiliano, after some difficulties in qualifying practice caused by weather conditions, he fought always for a top 20 placement in the heats, missing a spot for the superheats for only 7 points due to a crash.

Jordon Lennox-Lamb, Team Manager: “It’s been a long, hard weekend in Napoli, but we managed to get some great satisfaction. I am so proud of Gerasim, he was fantastic and deserved that podium after all the excellent work done during the whole weekend: I’m sure he will be able to get up again. I am as always very satisfied with the work of the whole team: we have shown that we can, once again, create an excellent workflow.”