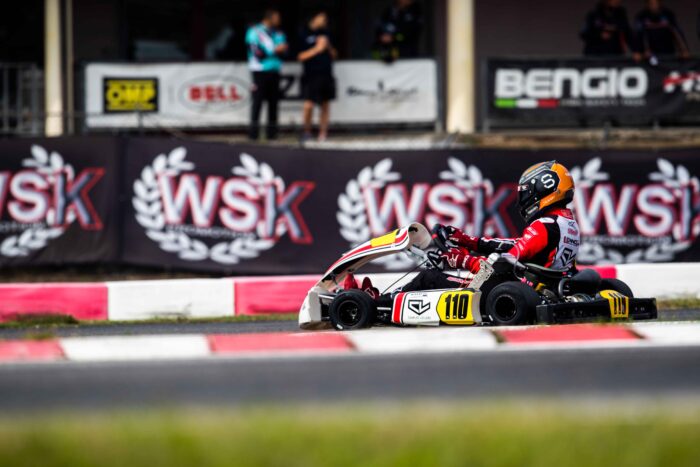 Despite the tricky weather conditions we performed well at the South Garda Karting. Our team was represented by Gerasim Skulanov, Petr Ageev, and Matias Orjuela in OKJ and by Nathan Schaap and Robin Glerum in KZ2.

In OKJ the weekend started in the best possible way for Peter Ageev, who proved immediately to have found an incredible feeling with his CL Kart catching the pole position in his qualifying group (2nd overall) with the best time in sectors one and two. Petr turned out to be extremely fast also in qualifying heats, finishing in first place showing undisputed dominance in the third heat, and securing four top5 placements out of five in the others for a final 7th place in the standings after the Heats. On Sunday, after some unexpected problems in the Prefinal, Ageev was able to redeem himself with a solid final race: the Russian driver handled the crucial phases quite well, crossing the line in P12.

Some more difficulties at the beginning for Skulanov placed 16th in Qualifying practice’s group B (P47 overall) due to some problems on the wet; Gerasim didn’t even shine in the qualifying heats, closed with just two top 10 placements out five. Sunday, undoubtedly began differently: Skulanov fought like a lion to recover as many spots as possible and gained 12 positions in the Prefinal thanks to a series of strong overtakes. Unfortunately, doubtful contact didn’t allow him to catch a positive result in the Final (P36).

Special mention for Orjuela, at his first overall experience with our team: after taking advantage of the qualifying practice to gain the right confidence, Matias turned out to be extremely solid in heats, staying always near to the best lap times and placing catching also a top ten placement in the last one. The Colombian driver did his best on Sunday as well, working perfectly with the team and missing by a couple of points a deserved qualification for the final phases of the competition.

Bittersweet weekend, on the other hand, in KZ2 for our team. Both Robin Glerum (P18) and Nathan Schaap (P24) were not able to find the best possible pace since qualifying practice. Our guys worked hard to improve in the shortest possible time but they could not find the right setup even in heats, closed by both, however, not too far from the top 10. After some difficulties even in the Prefinal, Glerum had an incredible exploit in the final: Robin recovered 12 spots and crossed the line in P16. Good race management from Schaap, who didn’t commit any mistakes and concluded his weekend with 17th place.

Jordon Lennox-Lamb, Team Manager: I’m pleased to see how much we are improved in the past few months: the growth of everyone is tangibly perceived, from the drivers to the team. We are still working hard, but I’m sure that we’ll soon get great satisfactions.”