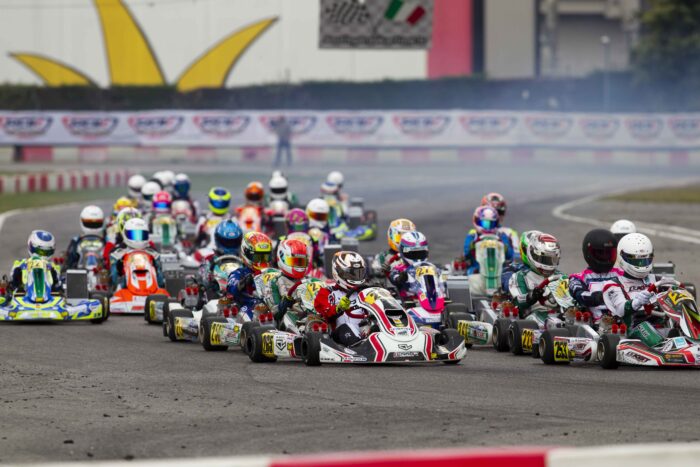 In Lonato, there’s been the opportunity to test a lot of talented drivers. Our team was represented by Gabriel Kawer, Davide Greco, and Hunter Pickett in Shifter. Oliver Stilp, Zoe Florescu Potolea, and Harry Yuill in the Junior.

The weekend started in a tricky way in Junior: all our drivers weren’t able to find the perfect feeling with the track in qualifying practice, but thanks to a positive mindset they all had lots of improvements during the heats. Very good job especially by Skulanov: after a diﬃcult qualifying (P7 in his group, P21 overall), he completely changed his mindset and managed to finish all the heats at the top3, being always amongst the fastest on track. Gerasim started the Final A in P2 with very high expectations, but his race turned out to be extremely conditioned by a 10 seconds penalty which forced him to settle for a final 14th place despite his incredible speed (he settled the fastest lap in 49.518).

Our other drivers fought hard: Florescu crossed the line in P10 in her qualifying group (P28 overall), then finished 11th and 7th in the last two heats after a lot of diﬃculties in the first two. Zoe has been an absolute protagonist in Final B, with six spots recovered from her starting position and getting a well-deserved P5. In the same race, even Oliver Stilp turned out to be a real crack after a surprising comeback, which guaranteed him a final P11 after negative practice and some good things showed during the heats. Significant improvements were also seen by Yuill, who closed his weekend 26th in Finale B showing a big room for improvement.

In the Shifter our drivers have always been very close to each other, keeping extremely similar lap times for the weekend. Gabriel Kawer was the fastest in qualifying practice (P9), but then he had some problems during the heats, closing with a P21 in the Heats Merge. However, he redeemed himself in the Final with a good comeback and some enjoyable battles on track, crossing the line in P15. The final result of Pickett (22nd) and Greco (23rd) was not quite as positive, but both of our drivers showed interesting things in qualifying practice and a surprisingly great pace during the heats: Greco secured a brilliant 6th place in the Heats Merge, while Pickett got a P13.

Jordon Lennox-Lamb, Team Manager: “I’m quite satisfied with what I’ve seen here in Lonato. We’ve been competitive with all our drivers despite some unfortunate results. Overall it was a weekend full of learning and a good test in view of the Super Final scheduled for next weekend.”