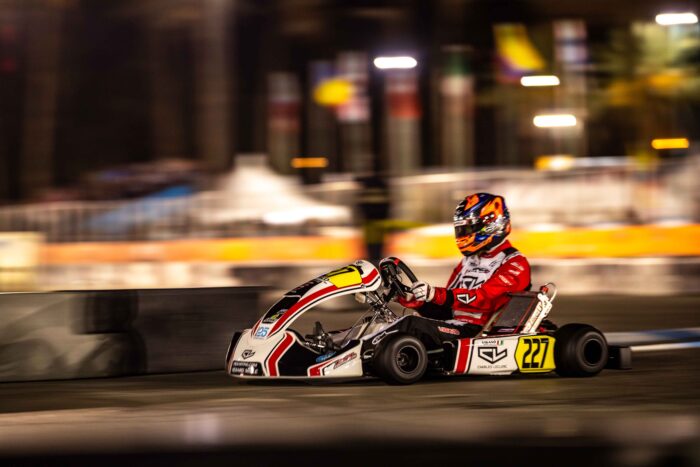 Las Vegas turned out to be a special experience for us, especially due to great teamwork and an incredible pace maintained by all our drivers. The team was represented in the X30 MS category by Thomas Grice, in Pro Shifter by Matteo Viganò, Axel Bengtsson, and Reece Ushijima and in KA 100 SR by Jai Brown.

Grice had his well-deserved moment of glory thanks to an incredible victory. Thomas showed immediately great confidence with the track since the Free Practices, catching first place in the fifth run before closing Final Practice with a promising 12th position. Grice confirmed great sensations with a P10 in Qualifying, before switching into a beast mode during the Final with a stunning performance, built on strong overtakes and perfect management of the hardest moments of the race: a victory that represented a lot for Thomas and all the team, finally paid off for all the remarkable efforts done during this season.

In Pro Shifter Matteo Viganò started his weekend in his typical solid way: the Italian driver got a P10 in qualifying and gave continuous signs of growth, constantly improving his pace even during the heats. Matteo showed incredible speed during the final, scoring even the best lap in 41.141, but unfortunately was forced to retire from the race due to contact: a real shame, especially considering that before the crash he was clearly the fastest on track. In the same class, Axel Bengtsson closed his experience in Las Vegas with a comforting 23rd place in the final, obtained after a good race and overall a more than positive weekend since qualifying. A bit more problems, instead, for Ushijima: his P35 in qualifying bodes well for a possible exploit, but Reece never found the perfect feeling during the heats and didn’t manage to qualify for the main event, concluding instead his weekend after just 7 laps of LCQ.

Brown proved to be an absolute protagonist in KA 100 SR. Jai found a remarkable feeling with the Las Vegas track already from free practices, confirming to be absolutely fast then thanks to the 11th place in the qualifying merge. After having remained in the very first positions also in the heats Brown he was sensational in the Final, raising his level of competitiveness even further without making mistakes: the 7th place finish is a reward for the excellent approach shown throughout the race.

Jordon Lennox-Lamb, Team Manager: “When you win of course you can only be incredibly satisfied. Thomas really did an incredible job bringing home a result that fully reflects his excellent qualities as a driver. However, I absolutely don’t want to forget the excellent work of the other guys and, above all, of a team that once again has given its all