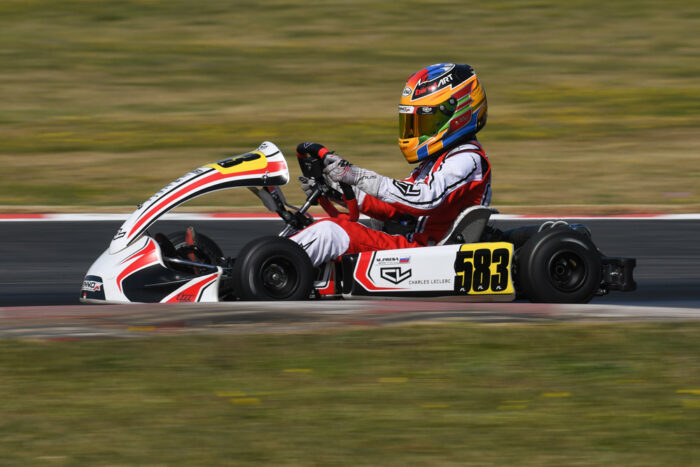 The team proved to be competitive in the second round of the WSK Super Master Series in Muro Leccese dedicated to the Mini, OKJ and OK classes.

A positive result for the Leclerc by Lennox Racing team over the weekend held in La Conca, for the second round of the WSK Super Master Series. The CL chassis manufactured by Birel ART and powered by TM Racing expressed their potential in all classes competing in the round, from MINI to OK.

In the premier class of single-speed karting, Martinius Stenshorne showed further progress in his start to the season as a rookie. The standard bearer of the team led by Jordon Lennox-Lamb has done well since the qualifiers, in which he achieved the second group time, just 3 thousandths from the first, and fourth overall. Stenshorne continued with a second, third and fourth place in the heats, also recording a fastest lap. Unfortunately, a retirement in his penultimate heat, which began with a good sprint from pole position, penalized him, and the Norwegian driver closed the final of a weekend as an absolute protagonist in 12th position.

Excellent performances in OK also for Ivan Domingues, who put into practice the experience he gained in the first two rounds of the season. The Portuguese driver started with the ninth group time in the qualifiers and continued steadily in the heats, where he achieved three sixth places and one tenth. Unfortunately, a five-second penalty received in the pre-final forced the standard bearer of the Leclerc by Lennox Racing team to start from the back of the grid in the final. However, with a noteworthy comeback, which saw him gain ten places from the start, Domingues ended his best weekend of the year in the top 20.

Oscar Aponte is becoming more and more familiar with the CL material and he qualified for the final in his third race in the most performing class of single-speed karting. The Swiss driver is giving encouraging signs in view of the upcoming seasonal events and is showing a remarkable learning curve.

Caleb Gafrarar also made progress in OKJ. The American driver used the technical circuit of La Conca to increase his experience and continue to improve.

Matic Presa confirmed his competitiveness in the MINI. After the seventh group time in the qualifiers and two top ten finishes in the heats, the young standard bearer of the Leclerc by Lennox Racing team finished 12th in the pre-final, only to be relegated to 16th place due to a five-second penalty. With a good comeback, which saw him gain eight positions from the start, the Swedish driver concluded another positive weekend overall.

The Leclerc by Lennox Racing team will see you at the next race, Round 3 of the WSK Super Master Series, which will be held at the Sarno circuit on the weekend of 26-28 March and in which KZ2 will also be back on the track.