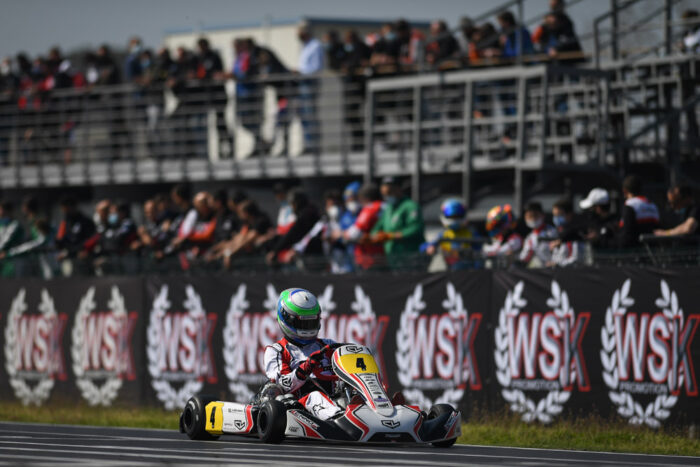 The team’s drivers proved to be very fast in the third round of the WSK Super Master Series, but bad luck compromised the final results.

A race with various drawbacks did not allow the Leclerc by Lennox Racing team to achieve the desired results on the Naples International Circuit. Despite this, the CL chassis manufactured by Birel ART and powered by TM Racing still proved to be competitive in all classes, from MINI to KZ2.

After triumphing in the first round of Adria, Viktor Gustavsson was once again a protagonist in the premier class and started the weekend with the second-best group time in the qualifiers, just 31 thousandths from pole position. The standard bearer of the Leclerc by Lennox Racing team continued with a victory and two second places in the heats, which earned him the leadership in the general rankings and therefore the start from the first box for the pre-final. A pacey race saw him finish in seventh place, but unfortunately the Swedish driver was relegated to 18th due to a 10-second penalty, thus depriving him of the final. Gustavsson is still third in the championship and will compete to try and win in the last round in Lonato.

A good performances in KZ2 also for Matteo Viganò and Laurens Van Hoepen. Still among the top ten in both his group in the qualifiers and in the heats, the Italian came fifth in the pre-final, but unfortunately he was forced to withdraw. The Dutchman obtained the fifth time in the group in the qualifiers and confirmed his place at the top of the rankings in the heats, but some problems on the track denied him access to the final.

Moritz Ebner again showed encouraging signs with solid comebacks in the heats, but a difficult pre-final meant he did not reach the final. An apprenticeship weekend, on the other hand, for Roman Sharapov, who is doing well in his first season. Finally, Axel Bengtsson reached the final thanks to a positive performance, but unfortunately he also had bad luck and he had to retire after three laps.

Martinius Stenshorne demonstrated continued progress in his rookie season in OK, and he was again among the best in his class. Eighth in his group in the qualifiers, the Norwegian driver proved to be competitive in the heats and crossed the finish line in his pre-final in fifth place following a comeback of six positions. With an exceptional sprint from ninth on the grid, the Leclerc by Lennox Racing team standard bearer battled for the podium in the early stages of the final and remained third for three laps, only to be forced to retire. Ivan Domingues’ performances are also constantly improving: he achieved the sixth group time in the qualifiers, two top ten finishes during the heats and 11th place in the pre-final. A final conditioned by contacts saw him finish in the top 20, but a five-second penalty relegated him.

Marcus Saeter accumulated more experience in OKJ and showed how much he had improved. One of the highlights of his weekend was the tenth place reached in one heat after having gained nine positions.

Matic Presa once again showed how fast he can race in the MINI. Eighth in his group in the qualifiers, the Slovenian also did well in the heats and even won a third place, only to be disqualified. The driver of the Leclerc by Lennox Racing team crossed the finish line of his pre-final in 12th place following a comeback of eight positions, but unfortunately in the final he was involved in a contact and did not achieve a result worthy of his potential.

The Leclerc by Lennox Racing team will see you at the next race, Round 1 of the WSK Euro Series, which will be held on the South Garda Karting circuit on the weekend of 9-11 April.