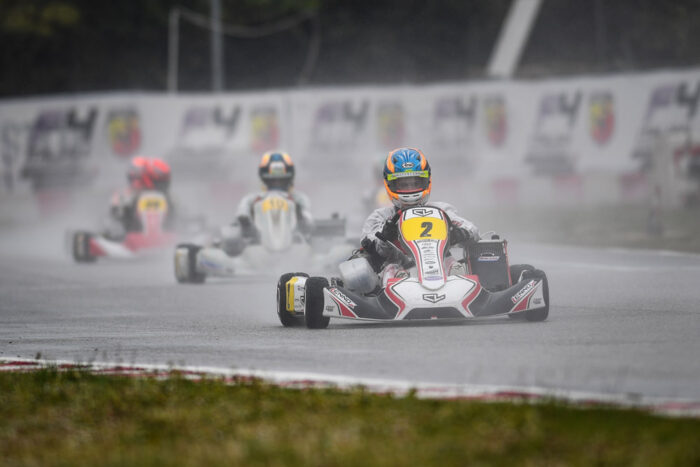 The team proved to be competitive once again in the first round of the WSK Euro Series, but some problems affected the final results.

A race which saw variable weather and some misfortunes did not allow all the drivers of the Leclerc by Lennox Racing team to achieve the excellent results that were within their reach. However, the CL chassis manufactured by Birel ART and powered by TM Racing once again showed its speed, in both dry and wet conditions, in all classes, from MINI to KZ2.

Laurens van Hoepen had his best weekend of the season in the gearbox class. The Dutch driver started with the fifth time in the group, just 47 thousandths from the pole position, and then always stayed among the top eight in the heats. The Dutchman confirmed himself at the top of the rankings on Sunday as well: in the final Van Hoepen crossed the line in ninth place, only to be relegated to tenth due to a five-second penalty. However, it is his first top ten of the year, proving his continued progress and the validity of the technical approach.

High level performances in KZ2 also for Matteo Viganò. The Italian achieved the second group time in the qualifiers. Unfortunately, however, from the first heats, luck turned its back on the Italian who did not even achieve part of the results he would have deserved given the conditions. A similar trend for Viktor Gustavsson: after having achieved the third group time in the qualifiers, the Swede was also competitive in the heats, in which he stood out for a third place and a fastest lap. Sunday, on the other hand, was a day to forget with, in the final, a contact on the first lap and a five-second penalty preventing him from achieving a result that reflected his potential. An even more bitter weekend for Axel Bengtsson, who saw the possibility of accessing the final vanish due to a premature retirement in his pre-final.

Martinius Stenshorne confirmed his ability in OK. Following the sixth group time in the qualifiers, the Norwegian driver was always among the best six even in the heats, although unfortunately he was forced to retire during one of them. The Leclerc by Lennox Racing team standard bearer was surprising under the rain: starting from eighth in the pre-final, the young rookie moved to third place in just 13 laps and flew towards second place, but unfortunately, just after achieving the fastest lap of the race, his chain fell, and he had to stop. Stenshorne thus lost the opportunity to be an absolute protagonist in the final.

Marcus Saeter’s weekend in OKJ was marked by continuous improvement. The Norwegian driver made a comeback in all the heats he raced in. He also recovered other positions on wet track: 14 in the pre-final and three in his first final of the season.

Matic Presa did not let himself down in the MINI. Sixth in his group in the qualifiers, the young Slovenian emerged in the heats, also achieving a second place and two thirds. The Leclerc by Lennox Racing team standard bearer proved to be competitive even in the rain: after slipping to 20th place on the second lap, Presa crossed the finish line of his pre-final in 11th place, while in the final he got near the top 15 following a comeback of five positions.

The Leclerc by Lennox Racing team will see you at the next race, Round 4 of the WSK Super Master Series, which will also be held at the Lonato circuit on the weekend of 23-25 ​​April.