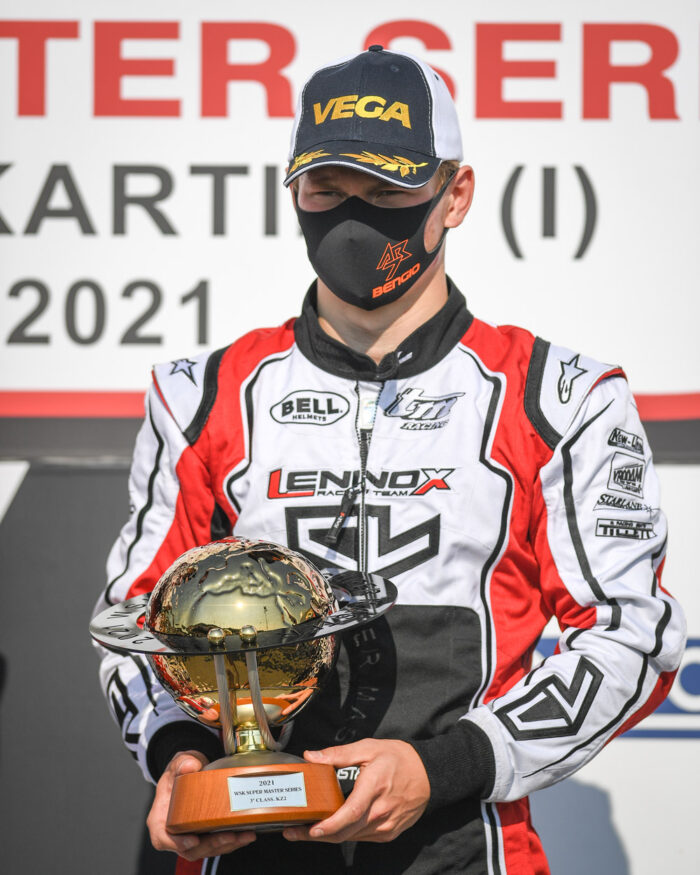 Thanks to a competitive weekend held in Lonato for the last round of the championship, the team managed to climb onto the third step of the final podium in KZ2 thanks to Viktor Gustavsson.

The first championship of 2021 ended positively for the Leclerc by Lennox Racing team. At the South Garda Karting circuit, the CL chassis produced by Birel ART and powered by TM Racing once again demonstrated their potential in all classes, from MINI to KZ2.

In the shifter class, Viktor Gustavsson was a stand-out performer in the weekend. The Swede started with the third fastest time in qualifying and was always inside the top four in the heats, even posting a fastest lap. After third place in the Pre-final, the standard-bearer of the Leclerc by Lennox Racing team came close to a podium finish in a hard-fought Final and was also given a five-second penalty due to the incorrect position of his nose panel. However, this didn’t prevent him from winning the bronze medal in the championship, also thanks to the win at the inaugural round in Adria.

Pedro Hiltbrand and Laurens Van Hoepen also turned in good performances in KZ2. The Spaniard was immediately incisive in his first race for CL and kicked-off with the fourth fastest group time in qualifying. The new driver of the Leclerc by Lennox Racing team confirmed his form in the heats and managed to win one, before crossing the finish line of his Pre-final in fifth place. Hiltbrand also started well in the Final, but unfortunately was forced to retire on the third lap. The same fate awaited his Dutch teammate, who started with determination by posting the fifth fastest group time in qualifying, but had to abandon the Final race prematurely. Axel Bengtsson‘s overall result was even more disappointing, just missing out on the Final after a solid weekend. Alessio La Martina, instead, had a promising first experience.

After missing the last two rounds, Caleb Gafrarar was back out on the track and demonstrated his progress in OKJ. The American driver climbed the standings in all his races of the weekend and his best result was 12th place in a heat after having moved up 13 places.

Matic Presa gave further proof of his ability in the MINI class. The standard-bearer of the Leclerc by Lennox Racing team managed pole position in his group in qualifying and confirmed his status as one of the best drivers in the heats thanks to a win and two third places. Unfortunately, the Slovenian driver was penalised by problems in his other two heats, but, following a Pre-final characterised by a number of scuffles, he managed to climb 17 positions in the Final and almost finished inside the top 15.

The Leclerc by Lennox Racing team is looking forward to the next race, Round 1 of Champions of the Future, which will be held at the Genk circuit next weekend, 30 April-2 May.