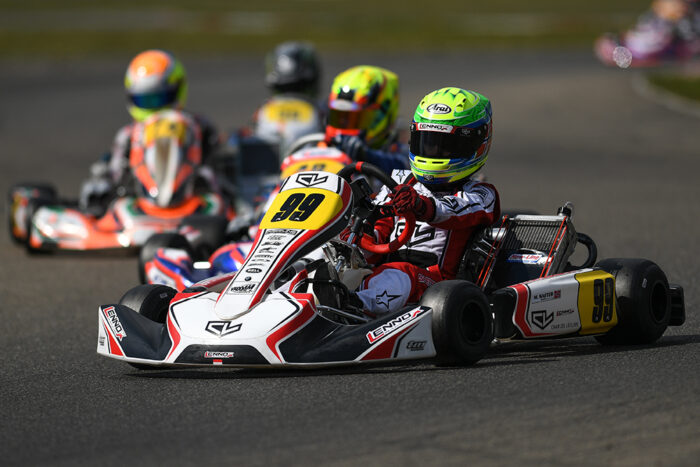 The team proves its competitiveness once again at the Karting Genk circuit in the first round of the Champions of the Future series and collects valuable data in view of the European championship.

Leclerc by Lennox Racing team’s performance during the weekend in Genk delivered positive results, featuring a race that acted as a testing ground for the first round of the FIA ​​European championship scheduled in two weeks’ time at the same circuit. The CL chassis produced by Birel ART and powered by TM Racing demonstrated their potential in both the classes involved, OK and OKJ.

In the premier class of single-speed karting, Pedro Hiltbrand’s performance over the weekend was a continuous crescendo. In his first appearance in OK with the CL colours, the Spanish driver got to know the material at his disposal and by the third heat he had already begun to make progress: he took fifth place after climbing six places. The standard-bearer of the Leclerc by Lennox Racing team climbed another six places in the Pre-final, finishing inside the top 15, to then improve in the Final. Indeed, the shower of rain that soaked the track a few minutes from the start allowed Hiltbrand to take full advantage of his experience and of his technical package: he was the fastest driver on track in the first phase of the race and crossed the finish line in sixth place thanks to another seven-place comeback.

There were also convincing performances in OK for Martinius Stenshorne. The Norwegian was in the top ten both in his group in qualifying and in most of his heats, although a series of penalties pushed him back in the overall standings. The driver of the Leclerc by Lennox Racing team climbed two places in the Pre-final and gained another three in a hard-fought Final, almost managing to get into the top 15, but a five-second penalty for the nose panel being incorrectly positioned cost him a few places.

Marcus Saeter took advantage of the weekend to gain more experience in OKJ and demonstrated his progress. After having performed well in the heats, the Norwegian driver won the consolation race and gave encouraging signals in view of the European championship. Starting in fourth place, the standard-bearer of the Leclerc by Lennox Racing team took the lead of the race on the fifth lap and managed to cross the line almost two seconds ahead of his direct rival, while also posting the fastest lap.

The Leclerc by Lennox Racing team now looks forward to the next race, Round 1 of the FIA ​​Karting European Championship, which will also be held at the Genk circuit on the weekend of 14-16 May.